Afonso Dhlakama, the leader of Renamo, Mozambique’s main opposition party, said in an interview released yesterday that he would sign a definitive peace agreement with the Mozambican president, Filipe Nyusi, sometime in October or November. 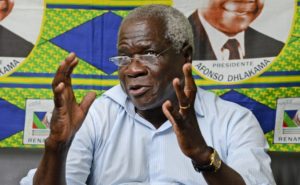 “This is the third agreement that I will sign. It will be in October or at the beginning of November,” Afonso Dhlakama said in an interview with Canal de Moçambique published on Wednesday.

The Mozambican National Resistance president says that the party is negotiating cautiously with the Mozambican government to avoid another failure similar to what happened after previous understandings between the parties.

“[In] everything that is being done with President Nyusi, we are being cautious – and not only us: it seems to me that he himself does not want to be the same as the others and make commitments that he cannot deliver,” Dhlakama said.

Renamo, Dhlakama said, wanted an agreement on specific points of divergence, and the group of ambassadors invited by the parties to follow the negotiations must pay attention.

“We want concrete things and we are also alerting the contact group so that they open their eyes because in the past it was a mistake, we were too motivated when we signed agreements and there was no monitoring by the international community here,” the leader of the main opposition party stressed.

Dhlakama reiterated that Renamo was demanding the integration of its staff in command positions in the Defence and Security Forces (FDS) and the approval of a legislative package establishing the direct election of provincial governors.

“What is agreed [in the dialogue between the parties] is that the President of the Republic cannot announce the date of the 2019 elections without these documents being approved by the Assembly of the Republic, mainly for the election of the governors,” he emphasised.

President Filipe Nyusi and the Renamo leader met last Thursday in an undisclosed location in Gorongosa. A statement issued by the Presidency of the Republic after the meeting said the two leaders pledged to conclude negotiations between the government and Renamo for the full restoration of peace by December.

Although the government and Renamo signed the General Peace Agreement in 1992 and a second one in 2014, Mozambique has been experiencing cyclical outbursts of post-election violence due to the opposition party’s refusal to accept defeat in elections.

In May, after contacts with the Mozambican head of State, the Renamo leader announced an indefinite truce with the FDS.