Ilorin - Farming in Nigeria is not for the fainthearted. 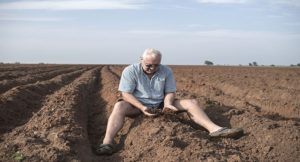 Irvine Reid, manager of Rosedale Dairy Farm, inspects the soil of a recently prepared land for cassava production on July 12, 2017.

But for a group of 13 hardy farmers from Zimbabwe, the opportunity was too good to pass up.

“When it comes to agriculture, there’s a lot that can be done here,” said Piet du Toit, a weather-beaten 64-year-old farmer from Zimbabwe, as he swung open the gate to his lush garden in Kwara state, western Nigeria.

“But it’s got a long way to go and it’s not going to happen overnight.”

Fourteen years ago, after Zimbabwe’s President Robert Mugabe seized white-owned farms in a controversial land reform programme, Du Toit took up an offer from the Kwara state government to take his skills to Nigeria.

He established a 1 000-hectare commercial farm in the virgin bush, two hours by car north of the state capital Ilorin.

Since then, the gruelling conditions have slashed the size of the original group from 13 to five.

Du Toit, who grows maize and soy, had to shift his focus to poultry farming this year after the plunging naira currency caused the cost of crop production to skyrocket.

Yet for all the challenges, he says business is booming.

But Nigeria is in the grip of its worst recession in 25 years after a plunge in oil prices.

Now the West African powerhouse is seeking to slash its dependency on crude revenues and wean itself off costly imports.

President Muhammadu Buhari’s government backs farming as one driver of recovery – but the reality has proved far more complicated, with farmers struggling to access credit.

Banks’ lending to the agriculture sector has risen from about one percent of their total credit to just four percent in over three years, said FBN Quest, a Lagos-based investment banking firm.

“This will not bring about the rapid growth in the agro-industry underpinning the federal government’s strategies,” it said in a recent note.

Most farming is done by subsistence smallholders which complicates efforts to standardise market prices and product quality, while depriving the government of much needed revenue.

“So much of the agricultural value chain is chaotic,” said Edward George, an analyst at Ecobank.

A significant proportion of what Nigeria produces is wasted because it cannot reach the marketplace, he added.

And because Nigeria’s food production has not kept up with a booming population, imports have soared, funded by the lucrative oil and gas industry.

“There are Nigerians who will use their cell phones to import pizza from London,” agriculture minister Audu Ogbeh complained recently.

‘Give them the best’

Like his fellow countryman Du Toit, Peter Crouch, a former tobacco farmer, has also thrown his lot in with poultry.

He opened a hatchery along with his son David in January as part of an egg-to-butcher chicken production operation.

“You have to have the full chain” since Nigeria does not have a developed system, said Crouch, as he took a drag from a Zimbabwean-made Madison cigarette.

Peter Crouch, manager at the Valentine Chicken Hatchery, inspects eggs before they are moved to the incubation rooms for hatching. (AFP)

But it is Nigeria’s epidemic of smuggled chicken that really ruffles Crouch’s feathers.

The issue illustrates one of the biggest problems facing modern Nigeria, where the informal sector represents a significant chunk of the country’s economy.

Though chicken imports are illegal, the birds keep coming.

Farmers blame Brazil, the world’s number one producer, saying it sells breasts and wings at a premium, then dumps the leftover carcasses at a cut-rate price in Nigeria.

“It’s a sophisticated business. If you were to close importation of illegal chicken, we wouldn’t be able to keep up (with demand),” said Crouch.

As the imported Zimbabwean farmers look forward to retirement, the next generation is already eyeing the future.

Comfort Babajide, 30, is a supervisor who works at the hatchery with her husband.

“Nigeria is looking more into agriculture, beyond petroleum services,” she said.

“Some people still believe in foreign or imported products rather than the local products.

“We can show them it can happen right here in Nigeria, we can give them the best.”