Epworth is a dormitory town located about 15 kilometers from Zimbabwe’s capital, Harare. 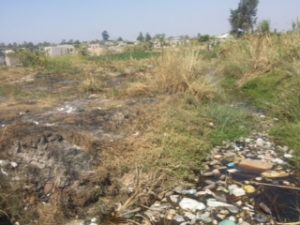 Houses built on a wetland in Epworth.

The dormitory town has a population of over 100 000 people.

Land invasions, owing to a plethora of factors, are quite rampant in the area and this trend has resulted in rampant wetlands destruction in the area.

The destruction of the wetlands in Epworth, like in many other areas in Harare, poses a huge threat to water availability given the fact that Harare largely relies on underground water.

Wetlands destruction in Harare has largely been as a result of land invasions for residential and industrial development purposes and these projects are often implemented without paying regard to the need to protect these important sources of water.

As wetlands destruction continues unabated, the water table continues to fall and the Zimbabwe National Water Authority (ZINWA) has also raised the red flag over the issue.

In Epworth, the water table has drastically fallen down as a result of people building on wetlands.

Elias Mutali (55) is a concerned Epworth resident who is of the view that unless corrective action is taken, water availability will be a challenge “in the coming years”.

“In the last years, we would dig wells of about five (or less) meters to get water but the situation has changed now and we have to dig deeper because the water table has fallen. Water sources are being destroyed and this will be a huge problem in the coming years.

“Of course, people are entitled to shelter but it is of paramount importance for us to preserve wetlands which are the sources of water for Harare. We cannot have a situation whereby a few individuals benefit at the expense of the majority,” said Mutali.

In light of the challenges being posed by wetlands destruction in Harare, the Harare Wetlands Trust (HWT), an umbrella trust incorporating civil society organizations, community based organizations and concerned individuals dedicated to the protection of wetlands, has rolled out a campaign to mobilize communities to actively participate in wetlands preservation.

The Trust is mobilizing residents to be part of the Local Environmental Action Plans (LEAPs) which are local plans that local authorities develop for the management of the environment in areas within their jurisdiction.

Speaking on the sidelines of a community meeting in Epworth, the Project Officer for the HWT project, Hardlife Mudzingwa said that community involvement in wetlands preservation was critical.

He added that it was critical to hold duty bearers to account so that the law is implemented as far as wetlands protection is concerned.

“The first step is to equip communities with the necessary knowledge on wetlands preservation and it is also critical to engage authorities and hold them to account on the issue of protecting wetlands. We have to teach the communities and authorities as well that wetlands are the sources of water for Harare and they should be protected given that water is life,” said Mudzingwa.

Zimbabwe is signatory to the Ramsar Convention on the protection of wetlands and the country has seven internationally recognized sites.

Recently, the Harare City Council, following concerted efforts from HWT, had to deploy municipal police to destroy illegal shacks that had been built on Monavale Vlei by a group of war veterans organized under the banner of Limpopo Housing Cooperative.

In Zimbabwe, wetlands are protected under the Environmental Management Act  but there is concern over lack of implementation of the law which has largely been responsible for the continued destruction of wetlands.