Johannesburg - Zimbabwe's first lady remained out of sight on Friday, several days after a young model claimed Grace Mugabe whipped her with an extension cord in a luxury hotel in South Africa. 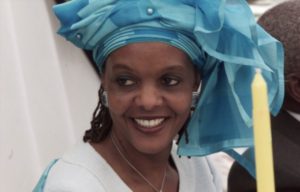 File: Zimbabwe’s first lady, Grace Mugabe was accused of assaulting a young woman with an electrical cord and plug at a hotel in Sandton on Sunday. Photo: Gallo Images/Sowetan/Elvis Ntombela

South African authorities are weighing a request by Zimbabwe’s government for diplomatic immunity for the first lady, who has not commented since the alleged assault on Sunday night.

South African police have issued a “red alert” at its borders to ensure Mugabe doesn’t leave undetected, and they say they are confident the first lady remains in the country. Police also say their investigation is complete but needs a government decision on the immunity appeal.

“However long it takes, we have to wait. There is nothing we can do,” a police spokesperson, Brigadier Vishnu Naidoo, told The Associated Press.

Spokespeople for the Department of International Relations and Co-operation and police could not immediately be reached on Friday.

Zimbabwe’s government and state media have not publicly addressed the assault allegations.

The scandal has become a diplomatic mess for South Africa’s government and Zimbabwe’s 93-year-old President Robert Mugabe, who arrived in South Africa’s capital late on Wednesday apparently to deal with the crisis. He came early for a regional summit of southern African nations this weekend.

It is not clear whether Grace entered South Africa on a personal or diplomatic passport. Zimbabwe’s state-owned newspaper reported last weekend said that she was in South Africa for medical care, but she told police after the alleged assault that she was scheduled to attend the summit with her husband.

Lawyers for the 20-year-old model, Gabriella Engels, have threatened to go to court if South Africa’s government grants Mugabe immunity, saying it cannot be used to “escape prosecution from grave crimes”.