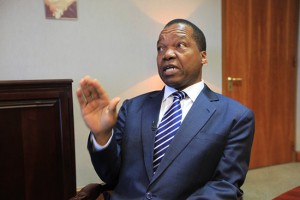 Under pressure from his masters at Shake Shake building, the central bank „conveniently‟ introduced bond notes in October 2016 with the hope of solving the liquidity crisis that was hitting hard on Zimbabwe‟s economy. In an effort to convince Zimbabweans and please his masters, Mangudya sensationally claimed that he would resign if bond notes fail to resuscitate Zimbabwe‟s crippling economy. Dr Mangudya made the remarks when he met activists and members of social movements in 2016, after they petitioned him not to proceed with his plans to introduce bond notes into Zimbabwe‟s ailing economy.

The recent decision to introduce 300 million worth of bond notes by central bank governor acting under the instruction from ZANU PF angered Zimbabweans who are now calling for his. A number of Zimbabweans feel that this move will boost the parallel market, benefiting the few who have access to cash direct from the bank and those who have hired agents for black market to trade foreign currency and bond notes while the poor will continue to lose their hard earned money to the black market.

“The governor emphasised as well on the need to set up an independent board to oversee bond notes which he, unfortunate-ly, has not yet done to date. He also lied in front of the nation that bond notes would be at 1:1 with the USD. Also, in one of his numerous addresses, Mangudya pointed out that no one will be forced to use bond notes in a multi-currency situation. What we see is however different as we have more if not only bond notes in circulation.”

Responding to this publication, ZIMCODD director Patricia Kasiamhuru noted that “The bond notes‟ value tumbled simply be-cause people did not accept/recognise them as an equivalent form of money and one of the characteristics of money is acceptability.

Lack of acceptability emanated from lack of confidence on the authorities which put in place the bond instrument/measure.”

Concerning the black market that is on the rise, ZIMCODD indicated that “The unacceptability of bond notes compared to other currencies, (US$, Rand, Pound, Euro, etc), brought about the foreign currency black market. The liquidity crisis introduced the use of plastic money to aid transactions. Again the public failed to totally accept plastic money as equivalent to hard cash (bond note, US$, etc.). This brought about another form of black market, where the bond note was traded with electronic money (swipe and mobile money transfers). These two parallel/black markets are currently holding money from the banking industry as money that ever gets out of the bank never finds its way back.”

ZIMCODD also emphasised that the authorities failed to curb the two parallel markets (electronic and hard cash) and anything liquid in the market is being mopped out and the problem remains. The additional US$300 million bond notes into the market will not be a solution to the current economic crisis in Zimbabwe. Rather the introduction of this money will fuel and boost the parallel market, benefiting the few who have access to cash from the bank who have hired agents for black market to trade foreign currency and bond notes.

A recent research by BMI Research warned that there is a likelihood of shortages of imported goods as the supply of hard currency with which to access foreign goods continues to fall. The research noted that businesses, retailers, bankers and individuals, among others head to the parallel market for hard currency — sourcing it out at premiums of between 15% and 25% — the aggregate effect would most likely be an in-crease in the prices of goods.

BMI Research warned last week that in-creasing money supply would contribute to an accelerated growth of inflation from 1,4% by year-end to 8,5% in 2018 — making the steepest growth since 2009.