HARARE/JOHANNESBURG (Reuters) - Some of the thousands of white Zimbabwean farmers evicted from their land in the early 2000s by President Robert Mugabe's supporters continue to hold out hopes of one day receiving compensation and returning to the country. 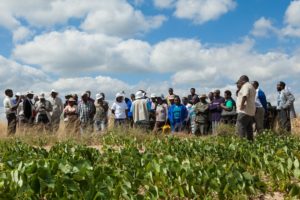 “I know friends who have gone to Zambia, Britain, South Africa and Australia. They’d love to come back to Zimbabwe,” Peter Steyl, President of Zimbabwe’s Commercial Farmers Union (CFU), told Reuters in an interview in Harare. The CFU represents white and black farmers.

Senior figures in Zimbabwe’s ruling ZANU-PF party have acknowledged publicly that white farmers should be compensated for their losses two decades ago, although talks with farmers have yet to produce any major breakthrough. Finance Minister Patrick Chinamasa told parliament in July that Harare had paid $134 million in compensation last year; farmers disputed this.

However, Steyl said that overall the relationship between the two sides was improving. “Things have progressed a lot in even the last year,” Steyl said. “I think mistakes were made on both sides and we’re beginning to talk to each other with a common goal for Zimbabwe.”

Land ownership has been a central issue for decades in Zimbabwe as it struggles to deal with racial discrimination dating back to British colonial rule in what was then Rhodesia. At independence, white farmers owned more than 70 percent of the most fertile land and generated 80 percent of the country’s agricultural output, according to academics.

Reforms began after independence with a “willing buyer, willing seller” system aimed at redistributing land to poor black subsistence farmers. In the 1990s, compulsory acquisition of land began with some funding provided by Britain. But for many poor Zimbabweans change was too slow.

Mugabe then approved radical land reforms that encouraged veterans from the fight for liberation to occupy some 4,000 white-owned commercial farms. The move secured him loyalty among the army and ruling party.

Most of the land went to Mugabe supporters, but many did not know how to farm. The agricultural economy and exports suffered.

Mugabe has rejected the possibility of mending rifts with white farmers, but his health is ailing and the mood within the ruling party is changing, according to farming and political sources.

One of the key obstacles to any deal is the issue of compensation. White farmers have largely agreed they shouldn’t be paid for land that became white-owned under British rule; but they do want to be compensated for the improvements they made and for farming machinery that was either stolen or destroyed during the early 2000s.

The cost of such compensation may be so high that Zimbabwe would need the help of the International Monetary Fund (IMF) to foot the bill.

Several farming sources said compensation for fixed assets and loss of income and stock – but not the land – could be as much as $10 billion. International creditors, including Western governments and the IMF, have made clear that farmers’ compensation needs to be agreed before wider discussions about rescheduling Zimbabwe’s existing $7 billion mountain of defaulted international debt, diplomats said.

Although thousands of white farmers fled after the land seizures, a few hundred chose to remain. “Farming is a difficult life. There are easier ways to make money,” said Steyl, the CFU president. But he added: “For a lot of the guys who left, it’s in their blood. That’s why they want to come back.”

(By Joe Brock and Ed Cropley. Editing By Richard Woods)