A bumper harvest has meant that Zimbabwe is largely food secure this season. Despite the fall armyworm outbreak, maize production was up to an estimated 2.1 million tonnes, thanks in large part to good rains. Government and donor support programmes supplying fertiliser helped too. 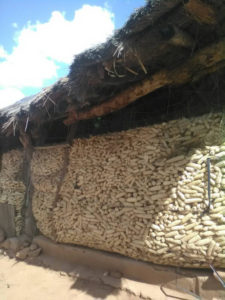 Total cereal production – including small grains such as sorghum and millet – was estimated to be 2.5 million tonnes. Areas planted expanded significantly, with maize planted on 1.9 million ha, up from 1.2 million ha the previous year. Tobacco production – a key source of income for buying food for many – suffered a bit due to heavy downpours and waterlogging, but a good season was recorded with 186 million kg produced. Grain imports were expected to be minimal – perhaps 5,000 tonnes mostly through informal cross-border exchange – and the GMB and private producers were storing grain in large quantities. The Grain Marketing Board was expecting to purchase about half a million tonnes of maize.

So, with a good season, combined with effective supply of lots of fertiliser, Zimbabwe returned to its former ‘breadbasket’ status. Or so goes one narrative on last season. Certainly output last year was impressive. Everywhere you went was a maize field; green and productive. The government hailed the ‘command agriculture’ scheme as the basis for reviving commercial production (see next week’s blog). And the aid donors were thrilled with their food security programming. But without greater resilience in the agri-food system, this new success is fragile. What if the rains fail again, as they did in 2016 due to El Nino, when only 512,000 tonnes of maize were produced?

Even in this year of apparent plenty, the ZimVac study, which looks at food security and livelihood vulnerability nationally, warned that some people, in some places, right at the end of the season were likely to be food insecure. The World Food Programme country director quoted the figure – 1.1 million people will be food insecure in Zimbabwe. As discussed many times on this blog, this sort of statement is dangerously misleading and irresponsible, but of course understandable, as it is wrapped up in the politics of food, and the positioning of large UN agencies, donors, relief NGOs and the state, each reliant on claims about food insecurity for their flows of income.

But there is an important point underlying the headline figure (which really is a distraction, but one the newspapers love each year when the ZimVac report comes out). As the detail of the report shows, vulnerabilities have not gone away. The cash crisis currently gripping the country, the stealth of rising inflation and parallel markets, and the lack of access to food or income to buy it is what is worrying. Pockets of vulnerability persist: on the margins of the country where market connections are poor; among highly marginalised groups (the unwell, disabled, aged, infirm, or child-headed households); and particularly in communal areas where access to productive assets (most notably land) is limited, or in urban settings where employment is fragile and connections to rural homes is weak.

With centralised food storage and a boosting of irrigation and production capacity in commercial farms (notably A2 land reform areas), the prospects of overall food balances being met at a national level are improving. But as Amartya Sen argued long ago, aggregate food availability is not the same as access and entitlement; and it is entitlement failure more often than not that causes food insecurity and famine. This is why the debate needs to shift to food systems – and the links between production, markets and provisioning. While getting estimates of total production through the annual crop assessments is vital, it is not enough. Even the relatively sophisticated vulnerability assessments that use this data do not capture everything, as I have discussed before.

The maps of food insecurity that the agencies put out do not reveal the social and political geography of the different colour shades. How are urban and rural areas linked? What is the relationship in the food system between communal areas and new resettlements? Where are markets and how are they linked to producers and consumers, by what infrastructure? And so on. This requires a more connected approach, one that perhaps looks at regional interactions, and especially links between areas.

My hunch is that at the heart of the new agri-food system, and central to a new perspective on food security in Zimbabwe are the new resettlement areas – to date mostly the A1 areas, but increasingly A2 too. While not everyone by any means, our data from Mvurwi, Matobo and Masvingo shows that there are a significant group (ranging from 60% to 40%, depending on site and season) who are producing surpluses year on year, selling on through local markets, transferring to relatives in town, or storing for future years. More or less everyone produced surpluses this year, but even in bad years, like the last few, this is an unseen motor of the new food economy.

In the generic reports or undifferentiated maps, this dynamic is not revealed. Aggregate pictures do not tell the full story. There is a politics to keeping this from view of course, but also a lack of capacity in data sampling and analysis. We are currently extending our earlier studies that looked at communal areas near our A1 sites to look at links, and interesting stories are emerging, but these will inevitably remain case studies in need of locating in a wider national picture for planning and policy.

It is great news that Zimbabwe is (mostly) food secure this season, and such a massive harvest was reaped. But food and agriculture policy cannot rely on just hoping for a good rainfall season – especially with the heightened variability due to climate change – and must take on board a more nuanced perspective rooted in a deeper understanding of how the post-land reform agri-food system works in Zimbabwe. It is amazing to me that this has yet to happen, more than 17 years on.