Tensions came to the fore last week when the World Bank held its annual meeting in Washington. Zimbabwe, Nigeria and India all have doubts about a policy they say does little to lift people out of poverty. Their unlikely ally is Donald Trump. 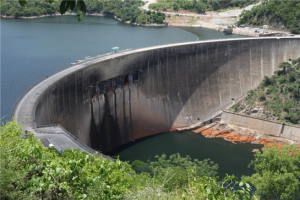 WASHINGTON DC – More than half-a-century after it was opened by the Queen Mother in 1960, Kariba is still the world’s biggest dam by volume.

Straddling the Zambezi, it stretches back 220 kilometres from the wall, with a catchment area the size of France.

But if Kariba was built today, the World Bank wouldn’t fund it. Same with the Three Gorges Dam in China, oil wells in Saudi or the coal-fired power stations that account for 60 per cent of Africa’s kilowatts.

At the bank’s annual summit last week, hosted by its president Dr Jim Yong Kim, these policies loomed into focus as more than 11,500 delegates, including six from Zimbabwe, converged on Washington.

Where else might you find Donald Trump and Robert Mugabe on the same side, along with India, China, Australia, Ghana, Nigeria and a clutch of others calling for change?

Conventional energy has fallen out of vogue and some say the bank has been hijacked by an army of lobbyists who want to shut down anything not powered by wind or sunshine.

In 2013 the bank adopted an outright ban on funding for coal except where there was no alternative. Thus far, the sole exception has been a power plant in Kosovo.

The World Bank’s mission is to end poverty using aid and loans, mostly for poor nations.  Critics say it is now following such a narrow agenda – with billions tied up in green projects – there’s a danger of losing the plot.

Based on its mammoth contribution to the bank, America is the biggest stakeholder, with more shares than any other country and, as a result, more votes.

Mr Trump, who has suspended his country from both the Paris climate accord and, last week, UNESCO, is a long-time critic of the bank and the billions it spends. He wants projects to be measured and costed like a private company, with the board held accountable when things go wrong. For now, no matter what happens, it’s rare for anyone in to be criticised, let alone fired.

Trump didn’t even bother to voice his verdict. Instead his finance minister, Steve Mnuchin issued a written statement saying there’d be no rise in the US contribution because, ”existing capital is not allocated effectively”.

The ledger, he said, needed to be trimmed with less going to rich countries. Trump has criticised loans to China saying the focus should be on the poor.

And, while reviewing that, said Mr Mnuchin, they should cut “the Executive Board budget” of salaries, expenses and pensions for the army of bureaucrats who run the bank.

There was worse to come. Halfway through the summit, a London think-tank published a report in which the bank’s former head of research suggested the entire institution be shut down.

The document, distributed at the meeting, was produced by the Global Warming Policy Forum with examples of how, in their view, the poor are losing out.

Titled, “The Anti-Development Bank,” the paper was authored by economist Rupert Darwall, one-time advisor to the UK treasury.

But it wasn’t the text that stung so much as some of the quotes. Indian government minister Piyush Goyal, for example, could have been speaking for Zimbabwe or any developing country when he said, ‘The people of India want a certain way of life. They want jobs for their children, schools and colleges, hospitals with uninterrupted power.”

Solar, he complained, only worked when the sun is shining.

“We need a very large amount of baseload power and this can only come from coal.

‘They’re saying to us, we’re sorry but you Indians can only have power for eight hours a day. The rest of the time you must live in darkness’.

In Zimbabwe, half the power comes from dams, all built in the Rhodesian era. The rest is from coal, or imported from South Africa where Eskom uses coal for 93 per cent of its output.

For his part, Dr Kim spoke passionately about the falling cost of renewables. Using his numbers, green electricity is cheaper than watts from coal, gas, the turbines of Lake Kariba, even the continent’s only nuclear plant in South Africa.

His rivals cried foul. Reliant on the weather, wind and solar work an average of nine hours a day, they said. Shovel coal or pipe in gas and you can generate, “all day, all night, all year”, so the cost-per-kilowatt is cheaper.

If there was a point of agreement – and there didn’t seem many in the week-long summit – it was pollution. No one spoke for smoggy skies and locals choking on fumes.

Not even Mr Trump who has put up record sums for clean-coal technology now used in America, Australia, Asia and, increasingly, Africa.

The bank is sniffy about dams but still looks at proposals, rejecting those like Kariba where the wall is on the trunk of a river (they prefer tributaries). Funding from China, Brazil, Turkey or Taiwan comes with less conditions and dams continue to be built.

“MAKE SURE THE PLAYING FIELD IS LEVEL”

But the frustration of many in Africa might be summed up by Nigerian finance minister, Kemi Adeosun.

“However, we are being blocked from doing so, because it is not green.”

“This is not fair because they have an entire western industrialisation that was built on coal-fired energy,” she said.

“This is the competitive advantage that was used to develop Europe, yet now that Nigeria wants to do it, they say it’s not green, so we cannot. They suggest that we use solar and wind, which is more expensive.”

Does Africa need to do more for itself?

Yes, she says. “But we must also make sure the playing field is level.”

There were issues aplenty at the meeting, all dependent one way or another on money. And with Donald Trump just nine months into his four-year term — antagonistic to the World Bank in general and its energy policy in particular – these are lean times.

Dr Kim predicted that, by 2020, more than a quarter of his budget will be linked to climate change.

For those protesting around the summit this was good news. There were demos on everything from tribes in the Amazon being moved by loggers, to gay rights in Egypt; those on energy sang the praise of wind and solar.

But they were mostly run by people from Europe and North America where the lights stay on.

In Zimbabwe, two-thirds of the population either live without electricity or with an unreliable supply that can go off at any time.

No country in sub-Saharan Africa is at 100 per cent, with some in single digits. Even the better economies like Nigeria, Ghana, Kenya or Tanzania have millions still in the dark.

Dr Kim conceded there was no single way to put this right.

“We’ve got to balance what we’re doing in terms of reducing the carbon footprint,” he said, ”and at the same time make sure the poor countries, who desperately need energy for economic growth, get access.”

There has been talk for years about a new dam on the Zambezi. But a drought in 2015 saw the flow at Kariba drop to a critical level. A weir upstream would have made it even worse and, for now, the plan is on hold.

By contrast, Zimbabwe has 500m tons of coal in the ground.

Ironically, at one point the World Bank conference had a black-out. The lights flickered, went off to a collective gasp, and came on again.

Charles Boamah from the African Development Bank who was speaking at the time broke into laughter.

“Well you know there are 600 million in Africa who don’t have access to electricity,” he said.

“Maybe they’re trying to tell us something.”