It is with grave concern that the above organisations have learned about the proposed donkey abattoir in Matabeleland, Zimbabwe. We would like to highlight the possible socio-economic, animal welfare and environmental consequences that might result from such a venture, and enlighten the Zimbabwean public on the experience of other countries that have licensed donkey abattoirs in Africa. 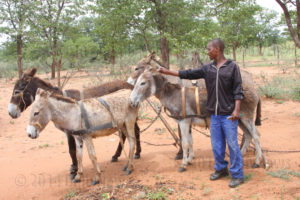 The main driver in the donkey parts trade is demand for their skins, which are processed into a luxury tonic ‘ejiao’, which is used in traditional Chinese medicine for everything from insomnia to impotence. It sells for the equivalent of 5,000 – 17,000 ZAR per kilo, depending on the product. According to FAOSTAT, China’s donkey population has fallen from 11 million in 1990 to six million in 2014, and according to The Donkey Sanctuary’s research, it may now be as low as three million and falling by about 300,000 per year. China is fast running out of donkeys to supply this industry, which processes a minimum of 1,8 million skins per year, and demand is forecast to easily reach 10 million skins per year. Given that the global donkey population is only c. 44 million, this insatiable demand is simply not sustainable.

Zimbabwe has an estimated population of 150,000 donkeys, spread over the communal areas where they are an integral part of community life. The proposed abattoir in Matabeleland has an ability to process 70 animals per day. If supply met demand, using 300 working days per year, the population of donkeys could be decreased by 21,000 donkeys per year. Donkeys are not suited as intensive production animals, since they have long gestation periods, high foal mortality, and slow foal development rates. Housed in unhabituated groups, donkeys suffer from a stress-induced condition called hyper-lipemia which can kill them. There currently is no ethically acceptable method of intensively farming donkeys, and the demand for the skin trade far exceeds the rate at which they can be produced.

Whilst some local farmers may benefit from the short-term sale of their donkeys, they are unlikely to be aware of the long-term consequences of this trade. The importance of the working donkey to communal farmers cannot be overstated. In Kenya, research has shown a working equid to have a net economic value of $2,272 per annum for villagers reliant on donkeys for their livelihoods. Over the 20-year working lifespan of a donkey, this would amount to a considerable loss of income for the short-term sale of the animal. As the donkey population dwindles, so the replacement cost of the donkey sky-rockets. This has been the situation in Kenya where demand from their 3 licensed abattoirs has caused prices to go from $40 per animal to over $160 in just six months. Communal farmers can now no longer afford to replace their donkeys and their communities become more destitute as a result. The price being fetched by the producer is in any case likely to be significantly lower than the middlemen/transporters or exporters. There is a very real possibility of a situation developing where the rich are profiting off the impoverishment of the vulnerable rural farmers. Communities in Zimbabwe have not been consulted about this decision that will very probably affect their future, and judging by the reaction of Lupane Youth for Development Director, Alfred Sihwa (quoted in the Sunday Mail, 1st Oct 2017) the move would not be welcomed.

Additionally, every country that has licensed donkey abattoirs has seen an increase in donkey theft. Botswana closed its operations on account of complaints from the communities. Trafficking of donkey skins in other countries is often linked to wildlife criminal syndicates, and legitimising the trade could provide new linkages for wildlife poachers.

Other animal welfare issues to be considered include:

Since the current Public Health legislation dealing with abattoirs and the slaughter of animals in Zimbabwe (SI 50 of 1995) pertains only to bovine, sheep, goats, rabbits, pigs, birds and game animals, there is no provision for equids, and therefore regulation of the slaughter of donkeys in terms of animal welfare would be impossible at present. Apart from the donkeys destined for slaughter, the additional workload placed upon remaining donkeys could be yet another disastrous animal welfare issue. Environmental pollution with regards to disposal of carcasses also needs to be taken into consideration.

Currently, 12 countries stand against the trade in donkey products, with 6 countries outright banning export of donkey products for the reasons outlined above. Out of the nine slaughterhouses in East Africa, six of those have closed and another one has temporarily shut.

FACT: Burkina Faso: 45,000 donkeys were slaughtered in a 6-month period leading to doubling of the price of donkeys. This, together with welfare and environmental infringements led to the banning of export of donkey products in August 2016.

If Zimbabwe licensed this donkey abattoir, it would be the only SADC country to be actively supporting this trade, which fellow SADC members are fighting so hard against. Donkeys are being actively stolen, poached or smuggled from Tanzania and Ethiopia into Kenya to feed the Kenyan slaughterhouses. This not only raises local tensions, but could cause a direct biosecurity threat in terms of disease control across borders. The country would therefore risk tarnishing its international image and neighbour-relations.

In numerous other countries in the world currently tackling the skin trade, none has managed to regulate a humane, environmentally sound trade in a way that benefits donkey-owning communities, and all have seen a significant and devastating illegal, underground trade.

We would therefore ask that Zimbabwean authorities consider these facts before legitimising a practice that belongs to another country’s culture. Recommendations: As a minimum, before any such exercise is even considered, a thorough long-term impact assessment needs to be performed: