The Limpopo rail line reopened on Sunday after a 15-day break for maintenance works, Mozambique’s Ports and Railways Company (CFM) says in a statement distributed today. 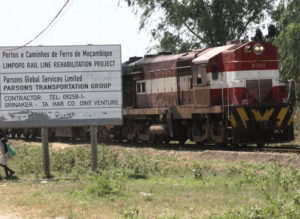 The suspension of services was initially projected to last seven days, but the scale of the work entailed required the company to extend the deadline, the statement reveals.

Speaking to Lusa earlier this month, CFM spokesman Adélio Dias said these were “routine works”, noting that maintenance was necessary to ensure the quality of the infrastructure.

“These are necessary works and will actually improve the line itself,” the spokesman stressed at the time, without clarifying what kind of operations would be carried out on the line.

The company in its statement does not advance the number of trains that were affected by the interruption or the cost of the works, but stresses again that maintenance will ensure a higher quality service.

The 522-kilometre Limpopo line is one of the links from southern Zimbabwe to the Indian ports of Mozambique and is capable of transporting about two million tons of cargo per year.

In February 2015, one person died and 12 were injured as a result of a freight train derailment on the Limpopo line. A year earlier, in January 2014, a 26-wagon train transporting sugar derailed, without fatalities.