This is the second excerpt from The Axe and the Tree by Stephen Griffiths. The Elim Mission Massacre was one of the worst atrocities of the Zimbabwe liberation struggle. 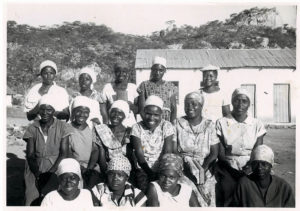 1974 The ‘ruwadzano’ or women’s group of Bhande Church

It was a deafening knock at the door. Levi Kombi, the school clerk tried to be quiet and chose not to answer, but the hammering went on. Voices spoke outside, “Why don’t you answer? Are you not the clerk? We have your Principal here. Open the door!”

Tremulously, Levi asked, “Who are you?”

The voices from the darkness responded, “Magandanga” (“vicious thugs”).[i] Levi crept forward, opened the window, and tried to look out. From the darkness,[ii] an open palm swung. The slap exploded against his face, sending his head thudding against the window frame. Stunned, he stood trembling as several other blows found their mark.

“You are refusing to open the door yet your Principal obeyed. Come out with your keys to the office. We want money,” hissed the voices. Levi turned back into the room and fumbled his way into his clothes. The moment he opened the door, cruel hands grabbed him and pulled him out. The unblinking eyes of gun barrels loomed out of the dark, and he was dimly aware of a large group of armed men around him.

He was led towards the school office. On the way, he saw a group of European people sitting together on the ground in the gloom near the sports field.[iii] He was afraid to look too closely, but he glimpsed Phil Evans being pulled out of the group. Together Levi and Phil walked at gunpoint to the office. Phil whispered, “Levi, give them all they want. Don’t refuse them.”

At the office door the keys were snatched from Levi. Levi saw that Phil’s arms were bound behind his back with electric cable. Phil could only stand there, helpless and humiliated, while rough hands were thrust into his pockets and emptied of the keys to the Principal’s office. The guerrillas ransacked the offices; as he watched, they opened the safe and cleaned it out. Levi and Phil were hustled back the way they came and sat together on the fringe of the larger group for a while.

The night sounds came thinly through the ear-buzzing terror that Levi felt. A harsh command came from one of the shadows standing guard, and the whole group stood up together. Levi and Phil walked together again into the unknown, but not for long. Levi was shoved out of the group to one side as the whites were led away from him into the shadows. His throat constricted with fear, he said nothing as he was forced back the way he had come, towards the office. To his surprise, there was a group of students standing there with a perimeter of armed men around them. After a short address, of which he remembered nothing, Levi was manhandled through the night once again, this time back to the door of his house. A face was thrust up against his, “Stay inside for the rest of the night. We are around, and if you get out of the house we will kill you.”

In the exhaustion of his terror, Levi slumped on his bed. Before he knew it, the early morning sun flickered across his bruised face. Befuddled by sleep, the events of the previous night felt like a strange dream. A wailing sound carried through the cool dawn air, in through the window that was still open from the night before. He wrenched open the door to see a young woman reeling towards him, crying out in an agony of fear and grief.

Levi recognized her – she helped the McCann family with their children. Brokenly, she recounted to him how she had got up early that morning and gone over the McCanns’ house to help with the children, as Sandra had asked her to. Surprised to see the door of the house already open, she walked in to find the lights burning. To her astonishment, supper was still on the table: a teaspoon sitting in an egg, a slice of toast with a half-moon bite mark perched on the plate’s edge. There was a great silence instead of the noisy activity of a house with young children. She had called out repeatedly, but only the echo of her own voice had come back to her.

Turning, she had gone back out of the house and begun to walk across to the school complex to see if the family had gone there. It was a misty morning, the clouds of guti, or fine drizzle, sweeping across the mountain ranges surrounding the school, and she shivered in the cold morning air. Passing the sports field, she glimpsed patches of colour against the green grass. Puzzled, she turned aside to see what was lying on the grass. Long moments passed as she stared, uncomprehending. Suddenly, a shudder of understanding shook her. Opening her mouth, she began to shriek with dread and then to run from what she had seen, a vision of death that no running would be able to leave behind.

On the morning of 24 June 1978, British South Africa Police (BSAP) Section Officer Poole[iv] rose very early …. As Poole came down the long sweep of the road running around the side of the hill and into the school premises, he saw a lone body lying at the steps of the sports pavilion. A dhemo[v] was still buried at the base of the man’s neck. His face was severely battered, one cheekbone crushed and the eye ruptured. Poole noticed that his hands were tied behind his body with electrical cable.

While Poole was still examining the body, one of his men shouted. More bodies lay close by on a grassy embankment on the edge of the sports field. They had been separated into two groups. Four adults and three children died together in one group, four adults and a child in the other. Suitcases lay scattered about and ripped open.

[i] Guerrillas were called magandanga by the Rhodesian Ministry of Information. In Shona, a gandanga means a person who lives in the forest, randomly cutting the throats of passers-by: a most vicious and terrible person. The word was sometimes taken and subverted by the guerrillas themselves.

[ii] It was a waning gibbous moon just three days after full. The moon rose at around 8.30 p.m. that night in that latitude/longitude.

[iii] Levi Kombi’s testimony to the inquest gave the last known location of the missionaries while still alive.