Jason Holder will lead an unchanged West Indies squad to Zimbabwe for a two-Test series that begins later this month. The same 16-member squad recently performed encouragingly in England, losing the Test series 2-1 but pulling off their first win in the country in 17 years in the second Test at Headingley. 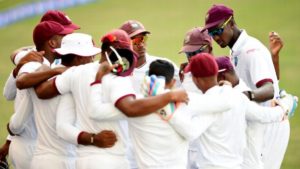 The selectors have gone with continuity, which means the likes of Kyle Hope – who only managed 41 runs in the his debut series at an average of 6.83 – and Shane Dowrich – who struggled with the gloves while only scoring 24 runs at 4.80 – keep their places despite enduring a difficult time in England.

“The selection panel is pleased to announce the same Test squad that toured England to visit Zimbabwe,” said Courtney Browne, the chairman of selectors. “The dedication, commitment and focus in their preparation and during the series in England showed immense character for such a young team in very difficult conditions against World-class competition.

“The lessons learnt on that tour augurs well for the individual players and the team’s continued development as a whole and we wish them well on the Tour of Zimbabwe.”

West Indies will begin their tour with a three-day warm-up game against Zimbabwe A, which begins on October 15 at the Bulawayo Athletic Club. The Queen’s Sports Club in Bulawayo will host both Tests, the first Test beginning on October 21 and the second on November 2.