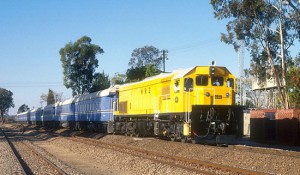 According to a source in CFM the agreement should guarantee the movement of large amounts of chrome and of iron ingots to the ports of Beira and Maputo along the Mozambican rail network (the Machipanda and Limpopo lines, respectively).

The agreement came into force on 1 November and is valid until December 2018. During that period it envisages the rail transport of about a million tonnes of these minerals for export, or around 70,000 tonnes a month.

With the signing of this agreement the amount of freight using the Limpopo line next year should rise to about a million tonnes, a figure never reached before.

To achieve these figures, CFM and NRZ are mobilizing the necessary locomotives and wagons.

The agreement was signed by the chairperson of the CFM board, Miguel Matabel, and by the company’s executive director for operations, Agostinho Langa. The managing director of NRZ, L.A. Mukwada, signed for his company, as did the Chief Executive Office of ZIMASCO, John Musekiwa.