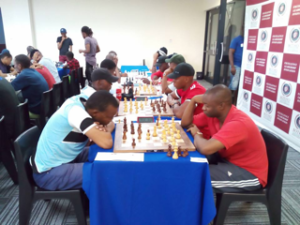 Spencer Masango in a red T-shirt playing white against Motswana player.He was the only Zim player who took part in this tourney and all the other players were Tswanas.

The field had Some of Botswana’s best players who represented it at the Baku Chess Olympiad. These included among them Fide Master Tatho Olebile  and Ndawana Mosenya to mention just but some of the players who took part in the last Baku Chess Olympiad who participated in the tourney. Spencer Masango seems to be doing well in these international chess tournies. His rating is also improving with each tournament outing that e features in after performing well.

Though Masango was tied on the first position with the following players; Tatho Olebile and CM Mapini Otsile both of Botswana. Masango won all his first 6 games before faltering in the final round against Tatho Olebile of Botswana who was a point behind to finish with the same points that is 6 points out of the 7 games which they played. This tourney was fide rated and the Chief Arbiter for this tourney was non other than IA Vincent Masole of Botswana . Deputy Chief Arbiter was IA Simbarashe Murimi of Zimbabwe while the Tournament Director was Core Kelapithwe of Botswana.This tourney was held at Botho University in Francis Town which is just a few kilometres after Plumtree border post.

The closest to Zimbabwe. The Botswana Chess federation is spreading the game of chess to all the corners of the country and the game is becoming very popular with the players. Even scholars are also taking part in these tournies and this makes them competitive chess players when they compete with the elderly chess players whose experience is of repute. They learn a lot from the seasoned players such that when they play with players of their ages they will easily triumph against them when they use the much needed experience. Meanwhile Elisha Chimbamu also took part in the Swaziland Open Chess tourney in the 5th round of the tourney he had 4 points according to the online updates.

This tourney was held in Manzini,Swaziland more news will be given in the next article as we get the final results of the tourney. The tourney also included CM Musatwe Simutowe of Zambia as the highest rated player. The Malawian Joseph Mwanza, and other players. Players from 8 federations featured in this tourney which is becoming very popular in the Southern African region.

A big thank you to Kasparov Chess Foundation which also assisted in ensuring that the country of Swaziland is brought on the chess map in terms of fide ratings. The game is improving as well as the number of rated players is also increasing. Fungai Matahwa a Zimbabwean-born and now a Swazi- national also took part in this tournament. Meanwhile on the local scene the fixtures for the Harare Schools Chess league are out for more information you can get in touch with Mr Mambodza of Mufakose 2 High school or the Secretary Mr Lewis Kahoba. More news in the next Article