We speak to Sharon Pincott, who spent 13 years in the Hwange bush monitoring elephants, about the loading of scores more elephant calves to China, which is reportedly currently underway in Hwange. 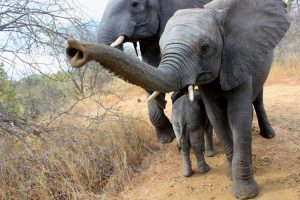 Sharon, we are noticing a lot of social media outrage about these latest elephant calf captures in Hwange National Park, and now their flight to China. You must feel like it is déjà vu?

It’s certainly difficult to believe that Zimbabwe continues with such unethical, barbaric practices in this day and age. Ripping young elephants from their mothers and families is unspeakably immoral, regardless of whether it is legal or not.

It’s supposed to be a ‘new Zimbabwe’ isn’t it? You can’t have a new Zimbabwe when your tourism and wildlife sectors continue to be shamed by the actions of your Parks Authority.

The current Wildlife Minister (Oppah Muchinguri) has blindly followed the lead of your previous Wildlife Minister (Saviour Kasukuwere; who has now been expelled from the Ruling Party) with regard to this disreputable practice. It’s past time for someone at the highest level – and that is the new President – to review this policy, which has so many in the Wildlife World feeling so outraged with Zimbabwe. I know first-hand that there are a lot of Parks Authority staff who are also outraged by this ongoing practice. Hopefully now, in this ‘new Zimbabwe’, they will be less afraid to make their own beliefs public.

We understand that overall you have spent more dedicated time in the field monitoring elephant families than anybody in Zimbabwe. From first hand knowledge and experience, what would you like to tell President Mnangagwa?

I’ve said it all a million times, even when I was still in Zimbabwe:

I saw for myself, over these many dedicated years, just how intelligent and human-like these animals are. I witnessed them grieving – sometimes with deeper grief than I’ve witnessed in humans – over dead or missing family members. I witnessed their undeniable intelligence and how they could communicate not just with each other, but also with me. After many years, some greeted me – with excited rumbles and with their temporal glands streaming – as they would a family member. And I witnessed just what incredibly close bonds these elephants have, not just within each family group, but within their extended families as well. For life.

There is no greater bond however, than that of a mother and her calves. A mother suckles her youngest calf right through until the birth of the next baby, which in Hwange – based on my own personal observations and recordings over more than a decade – is on average 3.8 years later. But even with the birth of the next calf, the bonds remain extreme, with the two youngest calves rarely away from their mother’s side for long. Yet it is the youngest, or the second-youngest calf, who is being ripped from their mothers for sale to zoos.

I have witnessed first-hand not just the profound grief of a mother who has lost her calf (killed by a wire snare for example), but also the intense grief of an elder sibling to this same death (or disappearance). Death and despair tears elephant families apart. Sometimes, the family splits forever, unable to cope with this grief. And just like in humans, grief can turn to anger. And grieving, angry, and frightened elephants is a distressing and awfully sad sight, as I also know first-hand.

There has been some recent press about President Mnangagwa’s daughter, and her reported passion for wildlife conservation. What are your thoughts about this?

I certainly hope that it’s true. I have, though, seen and heard far too much first-hand – including from top Government officials and their family members over the years – to just blindly believe what I’ve recently read.

If President Mnangagwa’s daughter cares for wildlife as she purports, we need to hope that she dedicates time to inform her father on some things that the vast majority of Zimbabwean government officials haven’t in the past been bothered to care the least about. And they certainly haven’t been dependable in many of their actions. I would hope if the recent reports are an indication of her true character, then she will help to change this. And what a great thing that would be.

My two top wishes for 2018 are that President Mnangagwa will step in and immediately review Zimbabwe’s current policy on the ripping of young elephants from their families for sale to zoos – and rescind it immediately, and for good. He simply cannot hope to properly resurrect his tourism sector without this happening.

At the same time, my second wish is that he also reviews the private land grabs in the key areas of the Presidential Elephants of Zimbabwe in Hwange – that came to light in full force in 2013 – and rescind these Offer Letters immediately as well. This is no place for individual private land ownership by the likes of those who call themselves Gwango. President Mnangagwa needs to reallocate other land areas for these claimants, and right these wrongs of the past as well.

Sharon Pincott is the author of Elephant Dawn, available from Exclusive Books in South Africa and online as an Ebook and in paper form from the likes of Amazon and BookDepository. You can follow her on www.facebook.com/ElephantDawn