Finance minister Patrick Chinamasa’s budget speech sets a good precedence in terms of policy thrust of reform and economic resuscitation with clear government austerities, international community engagement and clarity on the contentious Indigenisation and Economic Empowerment Act, but the targets are unrealistic, Old Mutual has said. 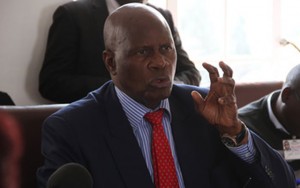 Finance and Economic Development Minister Patrick Chinamasa presents his 2018 National Budget proposals in Parliament“We must draw caution on the aggressive revenue forecast of $5,7 billion in 2018 against tax revenue collections of $3,85 billion in 2017.

“This is somewhat aggressive given a gross domestic product (GDP) growth forecast of 4,5 percent and donor fatigue in a number of sectors within the Zimbabwean economy,” the country’s largest insurance firm said.

This comes as Zimbabwe is unlikely to get significant multilateral funding in the short term given its international debt arrears and high country risk profile arising from the high level of domestic debt.

“There are international debt arrears that need to be cleared in addition to a number of socio-political and economic reforms that need to be embedded before noteworthy funding can be availed.

“We must bear in mind that 2018 is an election year with budgetary expectations that need to be met ahead of some of the highlighted infrastructure projects,” Old Mutual added.

Although Chinamasa was optimistic on the country’s future economic prospects, the budget speech was not clear on how and where the revenue will be generated.

In terms of tax revenue, a forecast of $5 billion is projected for 2018, 30 percent ahead of the 2017 tax revenue collections.

“Industry growth is premised on ease of doing business reforms and export growth which we believe are not short term problems hence a more conservative tax revenue figure in the short term would have been more amenable.

“Encouraging, however, is that while government hopes to fund $1 billion of the $1,7 capital expenditure budget, the balance of $0,7 billion is being sort from foreign investors under the auspices of a new Indigenisation Act, tax break incentives and new investor friendly policy thrust which may be a quick win,” Old Mutual said.

Chinamasa, however, said there was need for a paradigm shift for the country to achieve sustainable economic growth.

“Our quest for reversing economic decline and eradicating unemployment and poverty can only become reality if we walk the talk with regard to adoption of a paradigm shift in the way we do business and manage our economy, public enterprises and finances,” he said in his budget statement.

“As we focus on recovery of our economy, we must shed misbehaviours and acts of indiscipline which have characterised the past, while we address and reduce the high country risk perception among existing and prospective investors,” he added. DailyNews