Cape Town – President Jacob Zuma is set to meet with his Zimbabwean counterpart President Emmerson Mnangagwa on Thursday at his Mahlamba Ndlopfu residence in Pretoria, the presidency has said in a statement. 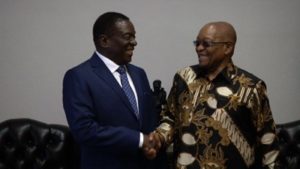 This would be Mnangagwa’s first working visit to South Africa since his inauguration on November 24.

“During the courtesy call, the two heads of state will share perspectives on various issues of mutual importance, such as, regional, continental and international developments,” the presidency said.

During the same visit, Mnangagwa would be expected to “address a high profile business conference” at the Zimbabwean embassy in Pretoria, News24 reported earlier.

This comes as Mnangagwa’s new administration strives “to revitalise the economy through attracting investment”.

According to the state-owned Herald newspaper, a statement by Zimbabwe’s embassy in South Africa on Tuesday said that all Zimbabwean business people based in South Africa and all those interested in investing in Zimbabwe are invited to the high-level meeting.

“His Excellency, Ambassador Isaac Moyo invites all Zimbabweans in South Africa and all business persons with an interest in investing in Zimbabwe to a business meeting which will be addressed by His Excellency, Cde ED Mnangagwa, the President of the Republic of Zimbabwe,” read part of the statement.

In his first speech as president of Zimbabwe, Mnangagwa emphasised his and Zanu-PF’s new commitment to growing the economy and creating jobs.

“As we focus on recovering our economy, we must shed misbehaviours and acts of indiscipline which have characterised the past. Acts of corruption must stop forthwith,” he said.

The Herald quoted him at the time as saying: “The many skilled Zimbabweans who have left the country over the years for a variety of reasons must now come into the broad economic calculus designed for our recovery and take off.”