This Friday the 23rd February the Catholic overseas aid agency of England and Wales, CAFOD is holding its annual Family Fast Day. 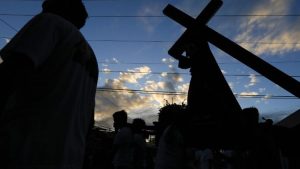 Image of the Via Crucis (AFP or licensors)

This year’s appeal will be going towards the funding of a three-year project to improve nutrition in Zimbabwe. During Lent every pound sterling that is donated will be matched by a pound from the UK Government.

Explaining why Zimbabwe was chosen this year, Grace Cowley,  who is responsible for community fundraising at CAFOD said that “Zimbabwe is a country that CAFOD has a long standing relationship with… and it’s a country that’s faced serious struggles in recent decades, it’s also facing serious impact from climate change.”

Give it up Challenge

Apart from the Family Fast Day Appeal, the agency is running a “Give it up Challenge” in which people during the season of Lent  can renounce things like chocolate or even give up social media. Indeed this year some Catholics have decided to give up Netflix and shopping.

She added that people can also connect more with their community during Lent by thinking about the environment and can make a positive impact by, for example giving up plastic.