I am still shocked that we are about 60 days in Mnangagwa era and still Zimbabwe is the same we have heard the talk that we have heard for the past 37 years during the elections from Zanu PF. The regime’s trend is to sweet talk us while they rig the elections behind the scenes and employ their usual tactics, intimidation, violence and threats. 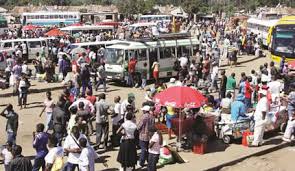 I am not just talking here as I have a lot of friends and families who are selling for a living in Mbare Markets Msika and Mupedzanhamo to name just a few. The traders in these areas, where it is Zanu Pf controlled, are told that their votes will be known now that they have biometric cards. Zanu PF Chipangano have been going round taking everyone’s biometric number to make them believe that their vote will be known. Their fate as in the past will be to expelled from the market places. One man comes to mind who was expelled because he was a staunch MDC supporter. He was kicked out by Chipangano even though he paid his rent to Harare City Council, and when he went to lodge a complaint at the council offices in Mbare he was told Zanu PF Chipangano is in charge their decision is final and he lost his rent as well.

The control in these areas by Zanu PF thugs has left many traders feeling threatened all the time, they are made to make contributions towards Chipangano and Zanu PF offices, one in Musanhu Shopping mall and the 4th street one, where anti Zanu people are head screaming for their lives while being tortured.  Vendors are so scared of the ruthless Chipangano that on many occasions the markets are closed and people are forced to attend rallies and Zanu Pf gatherings, be it going to the airport to sing and dance for the head of state and the first lady. Some of the vendors are so old that you feel sorry and wonder if Chipangano have a heart at all, they force them on lorries and once dumped in the place of rallies are forced to walk back on foot. This is happening now in Zimbabwe and you wonder if it is ever going to change? But surprisingly if MDC has a rally again Chipangano will be patrolling the markets to see whoever is missing so they can be tortured when they return and kicked out of their market stall.

Chipangano is even seen on what’s up forums threatening people and making sure there is no anti regime rhetoric or any form of dissent. I was expelled from most of my what’s up groups for criticising the regime. The anger that Chipangano leashes on these groups and how the rest of group members will be busy sending you private inbox message to say becareful they will kill you is socking to say the least, that this is happening in a Zimbabwe where we should be independent and can express what we want without fear. Mnangagwa has been telling the world that elections will be free and fair in Zimbabwe, the question is are the Vendors free to vote anyone other than Zanu PF when they know that they will lose their market stalls which is proving food for their children??  Surely I beg to differ. Has the behaviour of Zanu Pf changed since Mugabe left the State house, when we see Chiefs getting rewards from the regime to keep the leash on their communities. The chiefs have formed part of the Zanu Mafia on the defenceless and unarmed people of Zimbabwe. The same principles that they used during the liberation struggles on the villagers of the Pungwes is still what is happening these days. Villagers are coerced to attend only Zanu PF rallies which are called by the Chiefs. Food aid is also a tool that is being used now as without the Zanu PF card one cannot get  a bag of maize, beans, seeds or fertilizer. Surely the villagers are living in fear of torture in the form of starvation if they do not vote Zanu PF. Can we really say elections will be free and fair under such conditions, I beg to differ?

Change is only when the people of Zimbabwe will be free to express themselves and free to associate with any party without fear in the form intimidation harassment and in the case of vendors fear of losing their market stalls, and in the case of villagers fear not getting food aid or being kicked out of their communities. Change will only come when Mnangagwa can come out and tell Zimbabweans that their vote is their secret and no one will know who they vote for even if they have taken their biometric numbers. So for now nothing has changed in Zimbabwe as our people are still living in fear. Personally I have seen some of my relatives and friends even blocking be on their phones because I speak out against the regime and they fear being implicated in my case against the regime. So Change, what has changed in Zimbabwe????