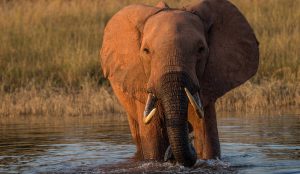 Separately, two people have also been arrested in Binga after they were found in possession of two pieces of ivory.
In an interview, Zimparks public relations manager Mr Tinashe Farawo said the elephant tusks had already been removed when the carcasses were found.

“Four elephants were found dead due to suspected cyanide poisoning at Hwange National Park and the carcasses were found after we increased our mobile patrols,” he said.

“The elephant tusks were already removed upon discovery.” Mr Farawo said a bucket of cyanide was recovered near the scene.

“We have so far recovered a bucket of cyanide in the nearby area and we are on high alert,” he said.

“In the same vein, we have arrested Markson Mleya (42) and Molo Mwembe (41) in Binga after they were found in possession of two pieces of ivory.”
Speaking at a passout parade for rangers and dog-handlers in Hwange recently, Minister of Environment, Water and Climate Mrs Oppah Muchinguri-Kashiri gave the green light to Zimparks rangers to shoot to kill.

“Due to Hwange National Park’s magnitude of wildlife diversity, poachers are attracted to rob our nation of its wildlife heritage,” she said.

“These poachers have become so daring to the extent of using sophisticated methods such as poisoning of our elephants in search of their raw ivory in great demand on the black market.
“Let me at this juncture reiterate that wildlife crime is a serious issue and as such our rangers will not hesitate to shoot and kill those found on the wrong side of the law.