Sharon Pincott and 287,508 other people, from 227 countries, plead with President Mnanagagwa and Zimbabwe officials for a policy change re capturing Elephants for sale to zoos. 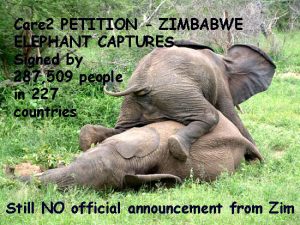 Elephants belong in the wilds of Africa

His Excellency the President of Zimbabwe, Mr Emmerson Mnangagwa

via Honourable Minister Christopher Mutsvangwa, Special Advisor to the President

Sharon Pincott, Elephant Specialist, Conservationist and published Author (13 years full-time in the field, 2001-2014, working alone on a voluntary basis with the clan of wild elephants known as the Presidential Elephants of Zimbabwe in Hwange)

RE: Feedback for you – from 287,509 people in 227 countries around the globe – in opposition to Zimbabwe’s current policy of allowing capture of elephants for sale to zoos

I trust this email finds you and your families well, and that the rains have been kind.

I refer you to my previous correspondence dated 24 January 2018. As promised, I’m attaching here an Excel spreadsheet containing summary information of those people around the world who, as at 31 January 2018, have signed a Petition requesting that Zimbabwe urgently review their policy of capturing elephants for sale to zoos, with a view to stopping this practice entirely.

Also in the Word document attached, you will find a copy of this email (ie the one you’re currently reading), together with a copy of the Petition wording, and the Petition letter – as addressed to you all. I ask you to please read these additional Petition pages there.

Please know that the Care2 petition system ensures that each signatory is a genuine person, and that there are no duplicates. If an email address (which is required) bounces, this name is removed from the petition. (Note that email addresses aren’t included in the Excel document attached, for privacy reasons.) Name, country code and comments are however all included, for your information.

The message to you all, from around the world, is loud and clear:  Elephants are highly intelligent, sensitive creatures who share lifelong family bonds. Capturing and transporting elephants overseas is morally reprehensible and devastating from an animal welfare perspective. Your non-consumptive wildlife tourism industry is also suffering as a result.

From Australia and New Zealand (the lands ‘Down Under’), all the way to Greenland (the land ‘Up Over’), 287,509 people in 227 countries right across the globe, have voiced their opposition to Zimbabwe’s current elephant capture policy – and plead with you for positive change.

Your elephants are a national treasure, with a tourism pull second to none. I personally tried tirelessly during my 13 years in Zimbabwe with elephants, to help the government better understand and appreciate this, but my voice and others, at that time, was not enough.

More than 5,000 people from the African continent – from countries like South Africa, Botswana, Kenya and Tanzania – chose to sign this petition. The 200 from Zimbabwe I suggest to you are not reflective of the number of Zimbabweans who hold strong views about this issue. I think it’s fair to say that some Zimbabweans are still very hesitant to publicly put their name in a petition such as this, still fearing the possibility of retribution. I know that other Zimbabweans have chosen to voice their concerns elsewhere and in other ways. The same can be said for China.

While I understand that the majority of Zimbabwe’s tourists come currently from Africa, I suggest to you that it’s time to turn this statistic around in order to help rebuild your extraordinarily beautiful country and its economy.

The UK, and the European countries of France, Germany, the Netherlands and Italy (just these 5 countries combined added over 60,000 signatures to this petition) – voice their concern loudly. More than 2,500 people in Russia, and almost 24,000 in Australia and New Zealand do the same.

If we ‘Look East’ to places like China, India, Indonesia, Iran and Malaysia, we find several thousand more voices in opposition to your elephant capture policies.

Perhaps not surprisingly, the Americas shout the loudest. Over 124,000 people in the USA alone implore you to amend your elephant capture policies with haste. More than 6,000 in South America ask you to do the same, as do 14,264 people in Canada.

There is enormous tourism potential from the Americas, which surely Zimbabwe must better tap into (as I and others did try very often to do during my more than a decade with your elephants in Hwange, but there were constant barriers at that time). Many Americans (and others) simply won’t visit your country while current wildlife policies are in place.

I know first-hand that the views and approvals of people and nations outside of Zimbabwe and Africa haven’t ranked as terribly important in Zimbabwe’s past. We all desperately hope, though, that in the ‘new Zimbabwe’ you’ll now welcome this input with open arms. I trust too that you’ll understand the need for me to share this letter with others.

If you could make the time, I’d be very grateful if you could acknowledge receipt of this correspondence.

With grateful thanks – and with unwavering hope,

Our best wishes to you all,

Sharon Pincott is the author of Elephant Dawn (2016), available worldwide, about her 13 years with elephants in Zimbabwe, written without restraint. You will find the full text of her Facebook post, which contains the above letter, on www.facebook.com/ElephantDawn