In terms of appearance, a vulture is not a good-looking bird and it’s not the type of bird to win a beauty contest. 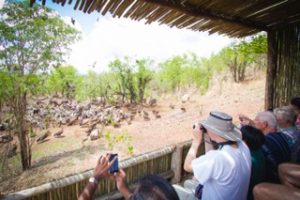 But according to experts, vultures play a critical role in keeping the environment from crashing.

However these vital birds are under siege in Zimbabwe as poachers are killing elephants using poisons which are also killing vultures which fed on the poisoned carcasses.

Though elephant poisonings are well documented in Zimbabwe, many people in the country are oblivious to the threats poachers pose to vultures, or just how important these birds are to the environment.  Even though efforts to save the country’s vultures are underway, experts are worried about the growing carnage and fear that these vultures face extinction not only in Zimbabwe but across southern Africa.

She warned that this would have serious consequences because vultures clear away carcasses and help to stop the spread of diseases like anthrax, rabies, cholera and tuberculosis.

“Without [vultures], the environment will crash,” Wolter warned. “They are a keystone species in that they help keep our environment in sync. We need our vultures to prevent the extinction of other species from disease epidemics and outbreaks”.

Wolter added that as vultures travel across southern Africa, poisoning in one place can affect birds throughout the region. She stressed the need for on the ground conservation organisations with government support.

“We are in a position to stop power line collisions and electrocutions by making sure power lines are safe. We have the potential to curb and control poisoning, but only with government support,” she said.

Against this backdrop, the Victoria Falls Safari Lodge in western Zimbabwe has come up with an innovative way of protecting vultures. It has developed a ‘vulture restaurant’, providing leftover meat as safe food and attracting as many as 200 vultures at a time.

Visitors who come to see the spectacle of these birds swooping down to feed also learn about the threats vultures face and about their ecological importance. The tourists are encouraged to make a donation towards vulture conservation and research.

“A major reason for vultures being endangered is that their food supply is under threat, for example if they consume the carcass of an animal treated with a commonly used veterinary drug, they die, and the supplementary feeding program provides them with a safe food source,” Betts said.

Betts said the Vulture Culture Experience was very popular with their guests, as it gave them a chance to learn about the ecological importance of vultures, the plight they are facing, as well as giving them a close up look at them, with the sight of them swooping down to feed, being particularly spectacular.

“While the activity is free to tourists, they are encouraged to make a donation, which goes towards vulture conservation and research. So this is a great example of how tourists are having a positive impact on our environment,” Betts added.

Africa Albida Tourism chief executive, Ross Kennedy, weighed-in adding that the Vulture Culture Experience was a very important educational platform that highlights the plight and challenges of vultures in Southern Africa.
Kennedy said vultures have been and are still suffering from enormous habitat destruction which is impacts nesting and, thus, breeding.

“Vultures are sentinels of the skies with eyesight to 100km, and therefore poachers have identified them as a threat or tell tale for Victoria Falls Anti-Poaching Unit scouts and National Parks scouts to know where poachers are operating, as they are attracted to the kill. Thus, poachers will kill an impala or kudu 5km away from their target elephant or rhino to distract surveillance,” Kennedy said.

And cattle farmers, Kennedy added, use a drug called diclofenac on cattle, and when cattle die they put carcasses out, and vultures feed on them and the drug harms or kill them.

The  Vulture Culture Experience , Kennedy said was started by  Roger Parry, a local wildlife vet , to assist the South Africa Vulture Foundation and VulPro and to educate and lift vulture awareness to the hundreds of thousands of visitors to Victoria Falls every year.

And Fadzai Matsvimbo, a vulture expert working for BirdLife Zimbabwe pointed out that, in India, rabies increased when the vulture population crashed.

“[Vultures] provide critical ecological services, and these stem from the birds’ unique way of life”, she said.

The Zimbabwe Parks and Wildlife Management Authority (Zimparks) did not respond to requests for information on government activities to stop the killing of vultures. However, Matsvimbo said BirdLife Zimbabwe was working on awareness-raising actions in partnership with relevant government departments — including the Zimparks — and nongovernmental organisations.

Every year, BirdLife Zimbabwe celebrates International Vulture Awareness Day to raise awareness of the status of vultures. Last year, it organised a public seminar on vultures at the Natural History Museum in the city of Bulawayo.

The organisation has also been working with Painted Dog Conservation, Zimparks and communities close to Hwange National Park to increase awareness on vultures, as most people were not aware that they were endangered.

Among communities surrounding national parks, myths and legends about vultures are common. Some people associate the birds with good luck while others link them to witchcraft. Some note that vultures indicate the presence of a dead animal, a fact that has led poachers to target the birds directly to avoid detection.

Poisoning is just the latest in a series of threats to vulture populations, along with habitat loss and widespread use of a veterinary drug called diclofenac that is fatal to vultures. Many vultures have died after consuming dead cattle whose meat contains the drug.

But unless the government can control poaching and poisoning, the future looks grim for Zimbabwe’s vultures.

Last month, environment minister Oppah Muchinguri, urged rangers to adopt a new shoot-to-kill’ policy against elephant poachers. She called tougher penalties and for educational programmes to raise public awareness of and the effects of poaching on ecosystem health.

“We need to all work together and not against each other for personal gain and egos,” said Kerri Wolter of VulPro. “We need to speak the same language when it comes to vulture conservation and work in unity. We need to work on the ground, be multi faceted and work with all aspects of conservation, which includes in-situ and ex-situ conservation”.

However, for Zimbabwe’s most threatened vulture species, time is fast running out.