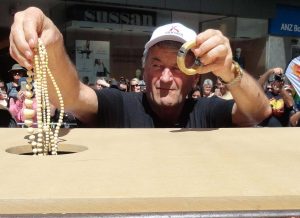 Nicholas Duncan places some surrendered ivory into a crusher in Melbourne

In her bag were 12 ivory items that strangers had entrusted her to dispose of. “Owning ivory is not a representation of wealth or status. It’s a representation of death,” Sharon tells us. “But because items do often have memories of family and friends attached, I feel proud and respectful of those who surrendered them.”

Of the Melbourne crush event itself, Sharon reflected: “While increased awareness within a country’s government and its population in general is absolutely key in getting the crucial elephant message out, I want to believe that the primary focus of ivory crushes like this one isn’t just about getting the media in prime positions for photographs, nor about spending a lot of time patting one another on the back. For so many dedicated conservationists, it is just as much, and perhaps more, about taking time to ensure that everyone properly understands and appreciates what is really going on with our world’s elephants. It’s about respectfully remembering all of those everywhere who have been slaughtered at the hands of ivory poachers – and pondering, too, those elephant relatives left behind to wander the plains and grieve, picking up the shattered pieces of their family lives. It’s about honouring those dedicated men and women who have themselves died at the hands of ivory poachers, sacrificing their own lives while giving their all to protect elephants on the ground. And it’s also about the heartfelt hope that not too many more ivory crushes will be required. There’s so much that we all must take time to reverentially ponder, over and above the unquestionably appalling statistics like one elephant dying every 15 minutes.”

This is Sharon’s story:

Bourke Street Mall in Melbourne’s CBD was abuzz with Saturday afternoon shoppers. The weather gods had been kind. It was World Wildlife Day, Saturday 3 March 2018. I was headed down the mall to Australia’s first widely advertised ivory crush event that was to begin at 1pm.

The first person I bumped into was Perth-based Nicholas Duncan, President of SAVE African Rhino Foundation, whose organisation has raised millions of dollars for rhino conservation in Zimbabwe over more than 30 years. “I decided to fly in,” Nicholas grinned at me, “after hearing that you were coming.” Although not one of the organisers, he kindly escorted me into a large cordoned off press area to surrender the ivory items I was carrying. It was important to me to take photographs for my donors, of the exchange of these items, and did thankfully manage to hurriedly click off just a few.

Soon, the event was underway. The Event Ambassador Collette Dinnigan, internationally acclaimed South African-born fashion designer, briefly addressed those in attendance, as did Jason Wood, a Member of the Australian Parliament and keen supporter of African wildlife. Donalea Patman, For the Love of Wildlife founder, shared a prepared speech. Just as the International Fund for Animal Welfare (IFAW) had asked me to join with them in urging the closure of all world international and domestic ivory markets at this same time last year (World Wildlife Day 2017), Donalea was also campaigning for an Australian domestic trade ban on ivory and also rhino horn. She wants these items “gone for good” from Australia.

In the week prior to this event, some on social media wondered how these ivory crushings would be disposed of. Here it was announced that they would be taken back to Africa. A moment of mispronunciation and confusion left those – who knew the name Mugabe was synonymous with only one family in Southern Africa – wondering what Mugabe, and indeed Mandela, had to do with this event, and particularly their association with Ian Player the renowned South African rhino conservationist. Later, still searching for answers, a quick google search suggested that it was probably the Ian Player Magqubu Ntombela (Ian’s lifelong friend and mentor) memorial in South Africa where the crushed ivory was to be ultimately buried.

With the three speakers quickly done, and congratulatory messages amongst themselves with regard to this event also already complete, the microphone was put down, and the crusher fired up. Only 15 minutes had passed, and there was to be no more commentary at all.

I was at least hopeful for another photograph to pass to my ivory donors, so that they could see that items had indeed been crushed. All that was going into the crusher was unfortunately coming out intact – but murmurs were overheard that this would be rectified later in the week when a more effective crushing machine could be accessed. Nicholas Duncan, a master of rhino events for decades, thoughtfully held high a handful of ivory items that everyone around could now see and photograph, before lowering them very slowly into the crushing machine. I and others had manoeuvred around, determined to grab a few decent photographs. Although we ensured that we were still more than a metre away from the occasional passing tram, which ran on lines down the middle of this Bourke Street mall, it was evidently an unacceptable place to be and we were quickly ordered to move off.

Most of the attendees further away from the crusher had already wandered off and I re-joined my friends, admittedly feeling quite frazzled. We’d heard some basic statistics about elephant and rhino lives and deaths, but I was saddened that proceedings had ended so quickly, the event completely fading away in less than 40 minutes. The press would get their stories, but there had not been a heartfelt opportunity for those present to really understand and reflect on the myriad tragedies that even this relatively small pile of surrendered ivory represented. While I sat with four friends for coffee and contemplation, I knew this missing part was profoundly important to me, and that I would do it in my own way the following day.

And so the next afternoon I went with friends to the picturesque Studley Park Boat House in the Melbourne suburb of Fairfield, set amongst towering oak and gum trees, where ducks and moorhens swam on the Yarra River, a pipe bridge for runners and cyclists built across this body of water. From the ground, on our walk to the river bank, I collected acorns (oak nuts) from beneath the oak trees.

I sat on the grass by the river bank and reflected on so many things.

There was so much to understand, ponder and reflect on, during this process of trying to get the Australian government to ban its domestic ivory trade.  There was so much that all of the surrendered and confiscated ivory pieces represented.

While watching the birds on the water in front of me and in the sky, I cried for every single one of those persecuted elephants whose ivory was their burden, and those whose lives continue to be horrifically affected by the ivory trade. And I cried too for every person on the ground who has also been horrifically affected by this ongoing tragedy. They were tears of understanding – and they were tears of hope.

One by one, I also threw my acorns into the Yarra River, ridding myself of so many things that had happened; that had negatively affected my 13 years of elephant work in Zimbabwe, and other things too that had happened while now back in Australia. I mourned, just as an elephant does.

…. And then, out of nowhere, there was an unexpected special gift that surely had to have come from above.

A young lady wandered along the path to my left, asking others about the water birds and the paddleboats, her partner now sitting on the grass somewhere behind me. When she eventually went to join him, she passed by me, noticing my pad and pencil.

“Are you sketching?” she asked me.

“No, I’d love to be able to draw but I’m just jotting down a few notes,” I said while still looking down at my pad.

“Are you a writer?” she asked, by now sitting with her partner on the grass behind me.

“What do you write about?” she asked.

“I write about elephants,” I said looking back at her ….

…. And what happened next astounded us all. Here I was far away in an Australian city that I hadn’t been to in 30 years. I was somewhere by the Yarra River where I had never been before. I was sitting there with all of my many memories of wild Africa and the elephants.

“Are you Sharon?” she asked.

And I stared at her, completely gobsmacked.

It turned out that she had finished reading my book, Elephant Dawn, just the night before. Her name was Julie, from the suburb of Lower Plenty. She spoke of many things including my elephant friend, Lady, who likely died at the hands of poachers, and of the Queensland town where I grew up. Hers were words of gratitude, concern, understanding and encouragement, kindly wishing both me and the elephants safe and happy times.

The murmuring coming from my friend Mandy (who is also a part of my story) signalled that she too was overwhelmed by what she was seeing and hearing!

Still feeling so connected to my beloved elephant friends, alive and dead, and indeed to all elephants who I’d never meet, I’m now sure in my heart that they, and other notable beings of the human kind, are somewhere, looking out for us. As we are for them.