Harare –UNDP Administrator, Mr. Achim Steiner who is also Vice Chair of the UN Development Group has concluded his three-day visit to Zimbabwe today with a meeting with His Excellency President Emmerson Dambudzo Mnangagwa. 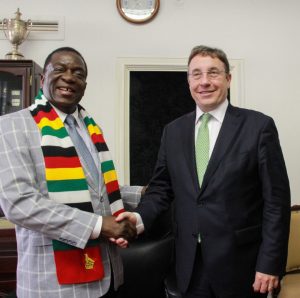 Mr. Steiner noted progress in the preparations for the election, the expressed commitment to hold credible and peaceful election and the ongoing reforms to attract investors and spur on economic recovery. The UNDP Administrator’s visit is the first high-level UN official visit since many years, signaling UN and UNDP’s continued support to the people of Zimbabwe.

During his visit, Mr. Steiner also met with Vice President Honourable Chiwenga, and Ministers of Finance, Justice, Lands and Agriculture, Health, and Environment as well as Development Partners and the UN Country Team. Meetings were also held with representatives of parliamentary political parties, representatives of civil society organizations and the private sector. He met with the independent institutions: Zimbabwe Human Rights Commission, the Zimbabwe Electoral Commission, the National Peace and Reconciliation Commission, and the Gender Commission.

Noting election are first and foremost for Zimbabweans, Mr. Steiner welcomed President Mnangagwa’s election pledge for a credible and peaceful election as an important milestone for a successful transition and key to the country’s future trajectory of international re-engagement and economic recovery. “UNDP is committed to continue supporting the preparatory process for the election and economic recovery efforts,” said Mr. Steiner.

His comments come after the Zimbabwe Electoral Commission (ZEC) launched a country-wide Biometric Voter Registration (BVR) process in October of last year as part of the preparations for election. Some 5.4 million voters have, so far been registered and the process is ongoing at the district offices of ZEC throughout the country. UNDP, with support from the European Union and Japan, as well as many Civil Society organizations in Zimbabwe, has contributed to this landmark voter education and registration exercise. Mr. Steiner was delighted witnessing firsthand a 19-year-old register to vote for the first time using the new technology at the Mbare registration center in Harare.

In his meetings with Zimbabwean officials, Mr. Steiner also discussed ways the international community could assist Zimbabwe with its economic recovery. “It is clear from my discussions with the President and other Government officials that jumpstarting Zimbabwe’s economic recovery is an urgent priority and we commend steps being taken by the Government in terms of policy and legal reforms to improve the ease of doing business,” said Mr. Steiner.

In line with the 2030 Agenda for Sustainable Development and its 17 Goals, scaling up investments in Zimbabwe’s key sectors such as small holder farmers and Small and Medium Enterprises as well as in the social sectors (health, education, social protection) and resilience building of vulnerable communities was underlined as part of an inclusive economic and social recovery. It is commendable to note the ambition of the Ministry of Finance’s plans to adhere to the Abuja declaration with regards to the 15% budgetary allocation to health and the continued investments in the education sector.

UNDP’s support through the $75 million Zimbabwe Resilience Building Fund – with EU, DfID and SIDA – is an important vehicle in addressing the resilience of over 800,000 people in the 18 most vulnerable districts in Zimbabwe. This is expected to be further enhanced by the climate change adaptation proposal that Zimbabwe will submit to the Green Climate Fund.

Given Zimbabwe’s economic reliance on its natural resources in agriculture, power, and tourism sectors, Mr. Steiner also highlighted the opportunities for investments in a green economic recovery strategy, which prioritizes sustainable investments that are job-intensive and would benefit the majority of Zimbabweans. Mr. Steiner pointed to the importance of access to electricity including significant opportunities that renewable energy could bring as a rapid, cost-effective, localized method to connecting people to energy and, hence, power the rural economy.

Discussions also covered the important role that agriculture plays in the Zimbabwean economy and hence the need to bring land into full productivity. Government’s commitment in settling pending land issues and land tenure is an important step for all farmers and a catalyst for agro-business transformation and a positive signal to investors. In addition, issues of the alignment of laws to the Constitution, support for the implementation of Universal Periodic Review recommendations and promotion of human rights were raised.

Mr. Steiner also had an opportunity to visit a health clinic with the Minister of Health and Child Care, witnessing the benefits of the #Solar4Health programme supported by the Global Fund ensuring continued energy for the clinic which is serving 200 outpatients per day and 215 childbirths per month. This clinic is one of 405 health locations across the country which will be powered by solar under this initiative.

In Zimbabwe, the UN family with support from its development partners, delivered $409 million in 2017, through projects and programmes across the country. UNDP accounts for $200 million of this support around four pillars: inclusive growth and sustainable livelihoods; democratic governance; climate change and resilience building; and HIV and AIDS programmes.