The governments of Mozambique, Botswana and Zimbabwe are to meet soon to revive the Techobanine Port construction project in Matutuíne district, Maputo province. 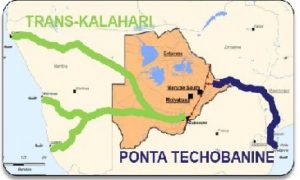 The partnership project will oversee the construction of a 1,700-kilometre railway line extending across the three countries, which will greatly facilitate trade among them.

The Minister of Foreign Affairs and Cooperation, José Pacheco, made the announcement at the end of the bilateral talks between the governments of Mozambique and Botswana on the occasion of the visit of the Tswana statesman Mokgweetsi Masisi.

Mozambique hopes to profit from Botswana’s experience in the conservation and tourism sector in particular, and 500 elephants are about to be translocated to Mozambique from the country.

Cooperative relations between Mozambique and Botswana date back to the colonial period.
During the talks, the two governments decided to create a joint Mozambique-Botswana Chamber of Commerce to facilitate the exploitation of the potential synergies between the two countries.

Masisi had a private meeting with President Filipe Nyusi and attended a working lunch hosted by his Mozambican counterpart.