AIM-listed Premier African Minerals, which has been actively present in Zimbabwe since its establishment 10 years ago, is confident that the change in government regime, which includes new policy statements that remove the heavily-weighted indigenisation regulations, will encourage foreign investment in the country. 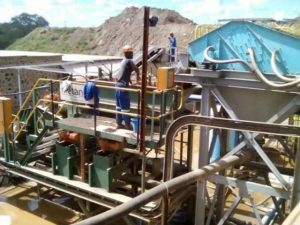 This equates to an ownership restructure of its RHA tungsten mine which will financially support the restart of the mine.

Once operational, the company’s momentum to continue developing its flagship Zulu project will also accelerate.
Although excited to develop its tungsten and lithium properties, the original 74% ownership structure of its RHA project specifically was heavily diluted over time as indigenisation regulations became compulsory.The journey of Premier African Minerals has been an arduous one – upon entering the country a decade back and acquiring its assets shortly thereafter – legislation changes have not favoured financial prosperity for the company says Premier African Minerals executive chairman and CEO George Roach.

The new structure of 49% belonging to Premier African Minerals and 51% belonging to the National Indigenisation and Economic Development Fund (NIEEF) has proven financially unviable.

“We have provided 100% of the capital requirements to develop and operate this mine, but own less than half of the operation. This is no longer financially viable and has resulted in the temporary shutdown of the open pit portion of the mine,” Roach explains.

To date, RHA has received no contribution from NIEEF and is owed in excess of US$20 million before any adjustment for the true cost of that debt.

The company also continues to accrue lease payments for the plant and equipment at RHA, which are solely owned by Premier African Minerals on a fully secured basis.

Fortunately, Zimbabwe has entered an era of change following Zanu-PF Emmerson Mnangagwa’s appointment as president in November 2017 and his subsequent actions to remove regulatory challenges around project ownership in the country.

“We feel confident in the new president and the minister of mines who is approachable, available and willing to engage personally.”

This has seen Premier African Minerals effectively commence, in what remains ongoing discussions with NIEEF, who has indicated its willingness to agree to a mechanism to restructure its ownership of RHA.

“We remain committed to Zimbabwe, but continuing operations at RHA are now dependent on additional sources of capital being provided. New policy statements in Zimbabwe enable 100% foreign ownership of mining projects (outside the diamond and platinum sectors).

“We are however happy for some of the financial gains generated through RHA to remain within the country for the upliftment of its economy and its people, but a commercial and viable agreement is required with NIEEF to ensure a long-term future for RHA.”

With the regulatory issues amended, the future of Premier African Minerals looks bright.

The company owns properties which are high in value – tungsten markets are set to increase over the next few years as demand exceeds supply and the lithium sector is booming thanks to the electric vehicle market which has been predicted to grow substantially in the short-term future.

Situated close to the town of Hwange, the RHA operation has been designed to process and produce a wolframite (Fe, Mn) concentrate. It was placed on care and maintenance on 9 January 2018, pending the change in ownership.

It was brought into production in the third quarter of 2015, mining exclusively from the open pit.

The target throughput of 40 000 tpm of ROM material (16 000 tpm from the underground mine and 24 000 tpm from the open pit) would produce 100 000 metric ton units of tungsten trioxide concentrate per month.

At this rate, the mine has a lifespan extending beyond 30 years.

The mine at no point reached this target however. “We have encountered challenges around RHA’s resource grade assessment and therefore the ability to attain our forecast grade.”

Tungsten deposits are notoriously known for their difficulty in accurately forecasting grades due to inconsistent ore body structures.

“We have however largely resolved our processing challenges by incorporating XRT technology into the plant to increase the feed grade delivered to the recovery circuit of the plant. We have also further improved our understanding of the RHA resource,” Roach outlines.

For now, a small amount of work to access the underground stopes continues – accessed via both adit and shaft which extends to about 100 m below surface.

A potential separate listing for the Zulu project was until recently on the cards, but shareholders have determined the best value for the project will be extracted under the Premier African Minerals umbrella.

“While additional drilling, exploration and study work is required, we know with confidence that this is a large-scale, high quality lithium/spodumene project and we will develop it,” Roach says confidently.

Premier African Minerals owns 100% of this project and will not encounter shareholding dilution difficulties moving forward.

Zulu covers a 3.5 km² area and is located 80 km east of Bulawayo. It has a maiden mineral resource estimate of 20.1 Mt of 1.06% lithium oxide (Li2O) and 51 ppm tantalum pentoxide (Ta2O5). Metallurgical test work on the spodumene pegmatite has thus far achieved a recovery of 81.8% lithium.

Consulting expert Bara Consulting has completed a scoping study which has demonstrated a robust project with attractive economics based on two different scenarios.

A concentrate sales option would include a targeted annual production rate of 84 000 t of spodumene concentrate and 32 500 t of petalite concentrate for 15 years. It would require
$64 million to build the project, which is not an ‘indigestible’ amount considering the returns.

Bara has determined the project will have a $127 million pre-tax NPV at 10%, an 86% pre-tax IRR, an after-tax NPV at 10% of $92 million and just a very short two-year payback period. Over the 15-year period it will generate $1 billion in gross revenue (based on sales prices of $800/t spodumene concentrate and $400/t petalite concentrate).

“I would like to get this project off the ground as quickly as possible – regardless of which route we follow. My goal is to start production in early 2020,” says Roach.

Further to this, the company has also identified a 60 – 80 Mt exploration target on the property.

The maiden resource estimate at this stage covers only 35% of Zulu’s known 3.5 km surface strike length and drilling continues to upgrade and expand the estimate.

“We do know that the deposit remains open at depth and along strike.”

Looking forward, Premier African Minerals’ challenges will soon likely be in the past, positioning the company to restart its tungsten mine and thereafter deliver a world-class lithium project in what may be considered an investment-friendly destination in Africa – a position Zimbabwe has not realised for decades.

The Bara team visited the site during October 2017 to view the site, log drill cores, identify key infrastructural issues and conduct an environmental and social scan prior to undertaking the scoping study.

The site visit was followed by study work which included the following aspects:

In undertaking this work Bara were assisted by Middindi Consulting with the mining geotechnical evaluation aspects of the project.

The work was completed by Bara on time and on budget to the satisfaction of the client and we are currently in discussions with Premier to advance the project to the next stage of study.

Jim Pooley, Project Manager for the work undertaken and the current MD of Bara noted that:

The outcomes of the study show that the project has robust positive financials.

In addition, the project is situated in a country with a long mining history and significant mining expertise in a location with relatively good access to infrastructure when compared to other projects in Africa.

Pooley is of the opinion that this project certainly has economic potential and is worthy of further evaluation.