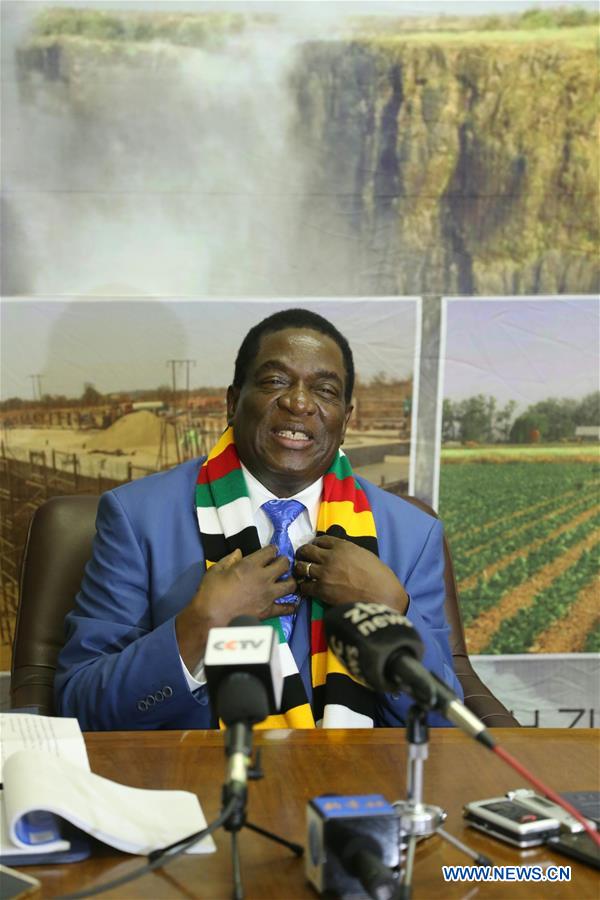 Zimbabwean President Emmerson Mnangagwa speaks in an interview with Xinhua and other Chinese media in Harare, Zimbabwe, March 31, 2018. Emmerson Mnangagwa said on Saturday his country is seeking deeper economic ties with China to leapfrog its economy battered by years of Western sanctions. Mnangagwa will pay a state visit to China on April 2-6. (Xinhua/Chen Yaqin)

Mnangagwa will travel to China for a state visit from April 2 to 6 at the invitation of his Chinese counterpart, Xi Jinping, marking his first state visit outside Africa as Zimbabwean president since taking office last November.

Speaking to Xinhua before his visit to China, Mnangagwa said his administration’s priority is to revive the economy and make Zimbabwe a middle-class income country by 2030, which needs deeper economic ties with China.

Zimbabwe will seek to tap into the huge financial resources, technical expertise and modern technology of its all-weather friend China, Mnangagwa said.

He said he had chosen China first outside Africa to thank the Asian country for standing by Zimbabwe during its most difficult times.

“I will say thank you not only to the president of China but also the people of China for standing and supporting Zimbabwe during the hard times when the West imposed sanctions on us,” Mnangagwa said.

“I have no doubt that in the economic forum meetings that I am going to address in China, I will be able to invite investors to come to Zimbabwe from China and tell them the opportunities that exist here and the environment, the security of investment that we have created in our own jurisdiction,” he added.

He said Zimbabwe had lost too much time with its economy and needed to move with speed in embracing new technologies.

Boosting both domestic and foreign direct investment was key to growing the economy, he said.

“The issue is not only about attracting capital into Zimbabwe. It’s an issue of leapfrogging after 18 years of isolation so that we catch up with the rest of the developing countries,” Mnangagwa said.

Mnangagwa said he will describe his vision for Zimbabwe, as well as targets and challenges to achieve it.

“We must have deeper economic relations with China. We know the road that we need to follow to grow our economy. We have priorities set out and we know the goals that we want to meet,” he said.

Investment opportunities in Zimbabwe, he said, exist in many sectors including infrastructure, agriculture, mining, transport and tourism, among others.

Mnangagwa, who came to China for training in the 1960s, said he had great admiration for Xi’s efforts to combat corruption, the same thing he is doing in Zimbabwe, which helps economic development.

Under a 100-day program, the new Zimbabwe administration implemented reforms including improving the ease of doing business to attract investment.

Zimbabwe’s ruling ZANU-PF party, he said, would continue to learn from the Communist Party of China and deepen relations with it as it has set a perfect example of good leadership to other political parties over the years, and was also one of the political parties that helped Zimbabwe to win independence from Britain in 1980.

China has steadily improved its economic ties with Africa under the Forum on China-Africa Cooperation and Zimbabwe would continue to deepen cooperation with the Asian country under the platform, Mnangagwa said.

On the Belt and Road Initiative proposed by his Chinese counterpart in 2013, Mnangagwa hailed it as a progressive initiative that will enhance global trade. He said Zimbabwe will fully participate in the initiative for the benefit of its economy.

“The Belt and Road Initiative is indeed a vision for the future,” Mnangagwa said. “Zimbabwe is one of those countries that has embraced it.”