Zimbabwean miner RioZim Ltd. is evaluating proposals from six companies to participate in its $1.2 billion power project, as the nation enjoys a return of foreign-investor attention under President Emmerson Mnangagwa. 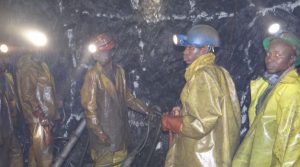 RioZim, which plans to supply the 700-megawatt Sengwa plant from its own coal operations, is in talks with mainly Chinese groups, including State Power Investment Corp., about the project, Caleb Dengu, RioZim’s director responsible for its energy unit, said by phone Wednesday. It expects to conclude negotiations after Zimbabwe holds elections later this year, he said.

“We are inviting companies as both equity investors and debt providers, we are going for 70 percent debt and 30 percent equity,” Dengu said. RioZim will participate in both structures.

Zimbabwe, which has seen power consumption fall on the closure of fertilizer plants and chrome smelters, still imports electricity from neighbors like Mozambique and South Africa to avoid outages that plagued industry for over a decade between 2007 and 2017.

Since replacing former President Robert Mugabe, Mnangagwa has courted foreign investment to help revive an economy that has halved in size since 2000. He’s already lifted requirements for most mining companies that they must be at least 51 percent owned by local black citizens. The so-called indigenization rule remains in place for platinum and diamonds.

“The country risk has gone down following the change of guard in Zimbabwe,” Dengu said. “The repeal of the indigenization laws has encouraged investors.”

RioZim, which also has interests in diamond and gold mining, is also planning a 100 megawatt solar project to supply its operations.

The company wants to more than double output at its Murowa diamond mine, although the plan depends on arranging the necessary funding, Chairman Lovemore Chihota said in March.

— With assistance by Brian Latham