Just a bit more than one week ago, Ghanaians and other Africans interested in the life and creative work of the famous musician Shatta Wale, learned about the star’s break-up with his second half, Shatta Michy. The two of them have clashed in social media. 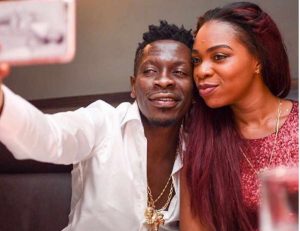 Both have accused the other of assault: Shatta Wale informed social media followers about his girlfriend pursuing him with a knife in her hand, while Michy accused him of assaulting her, and even posted a photo alleging this.

However, in the short period thereafter, Shatta Michy deleted these posts from her social media, and the public didn’t hear anything from them since 16th April. This silence from the celebrity and former partner has led to a great deal of speculation. Many even suspected the news to be fake.

You can find out more about this issue learning Shatta Wale latest news on YEN.

Charles Nii Armah Mensah Jr. (Shatta Wale) and his girlfriend Michelle Diamond Gbagbonah (Shatta Michy) have been together for over than eight years. They are parents of three-year-old son Majesty.

So, let’s try to clarify this situation. Keep reading to learn five reasons why news about Shatta Wale’s break up his woman could be fake.

Michy appeared in Wale’s life when he left his father’s home and was on his way back to the stage and public life.

Michy returned from Norway (Europe) to be with Shatta. Her relatives and friends there were allegedly keen for her not to be ‘stuck’ with Shatta Wale in Ghana. Michelle stayed with her man though, so this could be a sign of her devotion and loyalty.

There was a period when Shatta Wale was accused in the media of cheating. The public, baited by the media for Michy’s reaction to such accusations, were met with her silence. She acted with restraint, refusing to wash the couple’s dirty linen in public, even when the photos surfaced of Shatta Wale in the same bed with Efia Odo. If such an unpleasant situation, and the photo evidence of infidelity of her man, didn’t make Michy explode then what should be the reason for her attacking Shatta Wale with a knife?

Not so long ago, the public learned from Shatta Wale about him buying a new house for his beloved Michy. Is it the mark of a a failed relationship to buy expensive property for a partner soon to become an ex?

Less than 24 hours before Shatta Wale informed the public about the supposed break-up, he posted a photo of Michy, giving thanks to the organizers of Vodafone Ghana Music Awards (VGMAs) after Michy won an award. Is it likely that the man praises his beloved, and only 24 hours later starts to say all these negative things about her?

And Michy’s made a startling turnaround in her opinions of Wale just 48 hours before accusing him of assault; she called him ‘my king’ as a reaction to the controversial CNN interview with Moesha Boduong. In the following 48 hours, how did he transform from a king into a monster?

Ghanaians were told of a similar situation last year. Before the news about Shatta Wale’s cheating appeared in the media, there were reports that the musician had turned Michy out of the house. The reason for this was her alleged cheating. It was subsequently revealed that Michelle had spent almost five days in East Legon hotel. It appeared to be a successful PR stunt to attract publicity for Shatta Wale’s new song.

If the couple has used this method before, why should not we think that this time they also just want to attract public attention?

The musician is playing a leading role in a film “Kejetia vs Makola: The Return of Shatta Wale”. So can we surmise that the story is not about the real breakup of the celebrity couple, but instead the plot of the upcoming movie, and that the purpose of this ‘drama’ is to attract attention to the film?

Only time will show if this story is real or was created with commercial purposes in mind.