Legendary and revolutionary Zimbabwean musician, Thomas Mapfumo, has joined global calls to demand freedom and justice for Zambian musician and activist, Pilato aka Fumba Chama, ahead of his bail verdict tomorrow. 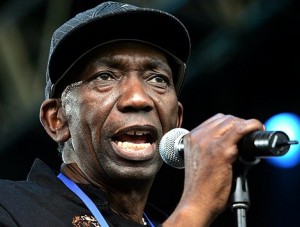 To down the video message and photos of Mapfumo click here

Mapfumo, affectionately known as the Lion of Zimbabwe, has produced hits such as Hatidi Politics, in which he reminds politicians not to take the electorate for granted, and he continues to enjoy a huge fanbase across the globe for his energetic chimurenga music.

Pilato was jailed on trumped up charges connected to his participation in a peaceful protest in September 2017 with other five fellow activists.

“The Zambian government is targeting people like Pilato because they arestanding up and demanding accountability from their government,” said Thomas Mapfumo.

“Pilato is a victim of a government that is trying to consolidate its base through the limiting of freedom of expression and in this case artistic expression. He is not a criminal. Instead of targeting criminals who are eroding state institutions, they are using him as a scapegoat. He must be released immediately and unconditionally.”
Pilato was arrested at Kenneth Kaunda International Airport on 16 May on his return home after spending four months in Johannesburg, South Africa.

He left Zambia in early January after receiving threats in response to his song Koswe Mumpoto (rat in the pot), which was interpreted as criticising President Edgar Lungu and his ruling Patriotic Front (PF) ministers.
In September 2017, Pilato aka Fumba Chama and five other activists, Lewis Mwape, Laura Miti, Sean Enock Tembo, Bornwell Mwewa, and Mika Mwambazi staged a peaceful protest outside Parliament demanding accountability for the procurement of 42 fire trucks at a cost of 42 million USD. The cost of the trucks was widely seen as exorbitant by the general Zambian population.

The six activists were arrested and beaten. They were later released on bail pending trial. The court appearances only began in 2018. However, since he fled the country, Pilato was not able to appear in court with fellow activists. As a result, an arrest warrant was issued in his name, but it is being contested as having been issued irregularly.

The six were prosecuted on 17 May for the protest, with Pilato remanded in custody to 21 May when the judge will give a verdict on whether he skipped bail. All the six-accused pleaded not guilty when they appeared in court on 17 May.

“The Zambian government is targeting musicians like Pilato and  activists to clearly send a chilling message that any dissenting view will not be tolerated. In participating in this protest these individuals have done absolutely nothing wrong – they are certainly not criminals,” said the legendary musician.

Mapfumo is a politically conscious musician and he dislikes abuse of power and corruption. He has sung about the struggles of poor people at the hands politicians who have been charged with managing their wealth, but often abusing it. He was jailed by the colonial regime for his hard-hitting lyrics against the repressive colonial regime during Zimbabwe’s liberation struggle. He fled Zimbabwe in 2004 under intense persecution from the then Robert Mugabe led regime. Mapfumo’s songs were banned on national radio as they were deemed too critical of the government.