Africa’s experience on inward foreign direct investment (FDI) presents a paradox. Conventionally, capital is expected to flow from countries with low to high returns. During 2006-2011, the region experienced the highest rate of return on FDI (11.4%) compared to 9.1% in Asia, 8.9% in Latin America and the Caribbean. The world’s average was 7.1%.  Yet Africa’s share of the global net FDI has been very low over the past decade (Figure 1). 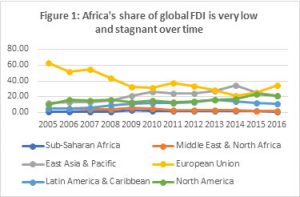 FDI, which used to concentrate in the extractive sector, is spreading across manufacturing and services sectors. The services sector, for instance, accounted for about three quarters of the greenfield FDI projects in 2016, while manufacturing accounted for about one fifth.  In fact, FDI is becoming a major source of financing economic diversification.

In Ethiopia, the focus of greenfield FDI in 2016 was manufacturing (e.g. leather products, pesticides, fertilizers and other agricultural chemicals) and infrastructure projects; and FDI helped Mauritius to diversify its economy from sugar into textiles and tourism, and recently into luxury real estate, offshore banking and medical tourism.

The existence of business opportunities in the extractive sector (e.g. oil and gas, gold, diamonds, cobalt and copper), shifting of light manufacturing from emerging countries like China, development of special economic zones (e.g. Mauritius, and Senegal), and improved investment policy regimes (e.g. investment promotion in Egypt, tax incentives in Tunisia and Zimbabwe) are among drivers of inflow FDI to Africa.

Why is Africa experiencing an FDI paradox? Africa’s labour and natural resource endowments are insufficient to attract financial capital. Other endowments count. Critical among these include low public capital (e.g. low infrastructure like energy, roads, rails and airports); low human capital (e.g. absence of skilled, educated and healthy labour force); and low institutional capital (weak security and judicial systems, weak property rights, and poor regulatory and standards). The high quality of these capitals enhances productivity of physical and financial capitals and reduces cost of doing business. When these are directly provided by investors, they serve as taxes on returns on investment.

Financial intermediation costs (e.g. high brokerage, loan evaluation, and agency costs, and contract enforcement) often proxied by domestic lending rates (which is as high as 60% in Madagascar and 44% in Malawi) impede FDI inflows. Maximizing the benefits of FDIs to Africa also requires avoiding competition between governments on provision of tax incentives (race to the bottom) that is biased against local entrepreneurs, and eschewing base erosion and profit sharing that denies African countries large tax revenues.

Addressing impediments to public, human and institutional capitals, as well as reducing sovereign risks and intermediation costs, and ensuring investment policy harmonization across African countries, are central to eliminating FDI paradox in Africa.

Dr.  Ayodele Odusola is the Chief Economist and Head of Strategy and Analysis Team, UNDP Africa.