HARARE — Zimbabwe's government is denying a report from Human Rights Watch that documented extensive child labor on the country's tobacco farms. Some of the children are as young as 10 years old, and the report says many have experienced acute nicotine poisoning from handling tobacco plants. 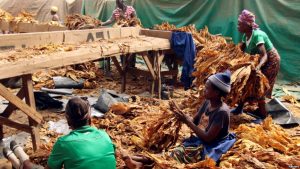 The 105-page report, titled “A Bitter Harvest,” documents how children working on tobacco farms in Zimbabwe are denied time in school and have to perform tasks that threaten their health and safety.

According to Human Rights Watch, one of the most serious risks is “Green Tobacco Sickness,” which is caused by absorbing nicotine through the skin from tobacco plants.

The rights group said the 14 child workers it interviewed, and most of the adults, said they had experienced at least one symptom consistent with acute nicotine poisoning, such as nausea, vomiting, headaches, or dizziness.

In an interview with VOA, the secretary for the Ministry of Labor and Social Welfare, Ngoni Masoka, said the Human Rights Watch report is “not factual” and has not been independently confirmed.

But he acknowledged that the youngsters face hazards working on Zimbabwean farms.

“What we need to do, we need to do a survey to determine the nature and extent of the child labor problems in our farms; that’s what we want to do,” said Masoka.

Masoka noted the problem is not limited to Zimbabwe. Millions of children around the world perform work on farms for little or no pay. Some are helping their families; others are working for low wages. In Zimbabwe, kids on tobacco farms earn less than $10 per day.

Ida Tsitsi Chimedza is programs coordinator of the International Labor Organization in Zimbabwe. She said the issue of child labor persists because of chronic poverty, which she called “the key driver of child labor,” and the HIV/AIDS pandemic, which forces children to support themselves when a parent dies.

Zimbabwe’s government has ratified the ILO convention that calls for the elimination of the worst forms of child labor, she notes. She says employers now have to get the message.

“We also talk of sensitization because it’s important that the people who employ should be aware that it is not right to employ children who are underage.”

Labor Secretary Masoka said the government has a commitment toward eliminating child labor in all forms.