The Zimbabwe rugby team slept on the street in protest at the standard of accommodation provided by its Tunisian opponents ... but that's just the start 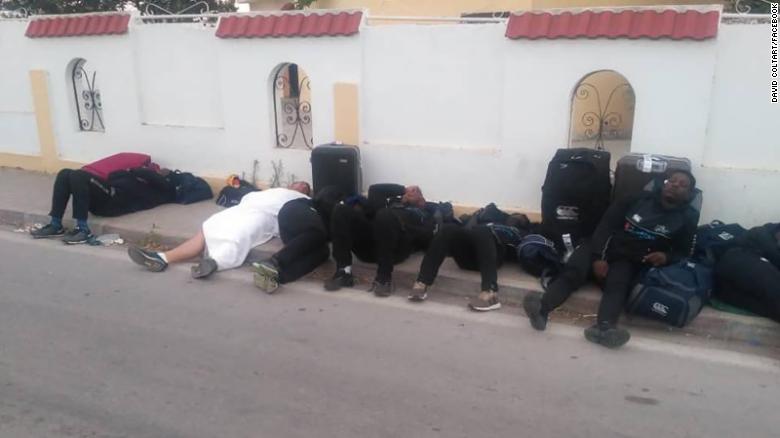 (CNN)Days before it has even kicked off, an otherwise run-of-the-mill international rugby match between Zimbabwe and Tunisia is embroiled in controversy.

Photos of the Zimbabwe team sleeping rough in the Tunisian city of Beja emerged on Tuesday sparking outrage on social media.
The players had taken to the streets in protest against the standard of hotel accommodation provided by their opponents ahead of Saturday’s Gold Cup clash, a qualifying game for next year’s World Cup.
“There are minimum standards that are set and that’s what we expect from Tunisia,” Zimbabwe Rugby Union President Aaron Jani told Harare radio station Capitalk FM. “This has not happened.” 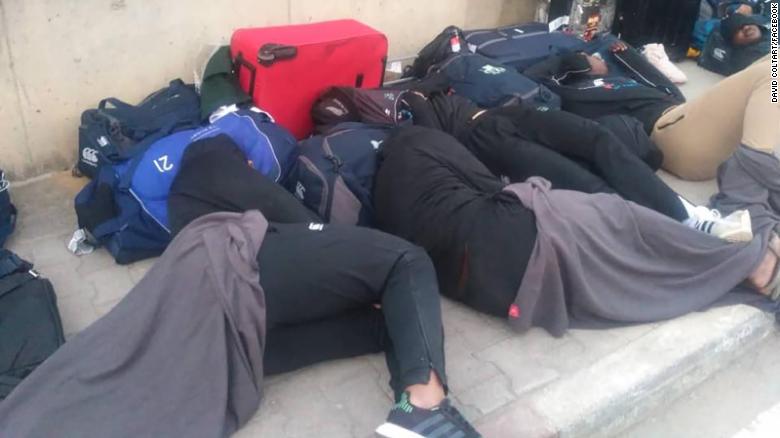 The players slept on the street to protest their poor hotel accommodation
Tournament organizer Rugby Africa promptly expressed its “sincere apologies” on behalf of the Tunisia Federation for what it called an “unfortunate situation,” saying the players had been relocated to new lodgings for the following night.
Rugby Africa executive member Khaled Babbou was quick to assure there had been no intention to “destabilize” the Zimbabweans, issuing a statement that said: “We pride ourselves in hosting Rugby Africa tournaments every year and make every effort to meet the best international standards in terms of accommodation and other infrastructure.”
But in a new twist, the Tunisian Federation has hit back, deploring the “anti-sports and unethical” actions of the Zimbabwe delegation and claiming they “started complaining as soon as they arrived.”
“Tunisia is, and always will be, a country of welcome and hospitality,” it said in a statement on Wednesday.
“After a lunch offered by the Tunisian Federation to its guests, an air-conditioned bus transfer was ensured for the members of the Zimbabwe delegation to the city of Béjà.
“They arrived at the hotel around 20:00, checked in at reception and all the members of the delegation of Zimbabwe were entitled to a dinner. Until then no problem was reported.
“Around 23:00, the team manager expressed reservations about the state of the bathroom in one of the rooms, the lack of a swimming pool and the low internet speed. So, he started talking about leaving the hotel on the pretext that it is not decent.”
“The quick intervention of the president and three members of the organizational committee was not enough to calm him down and convince him to spend the rest of the night at the hotel, ensuring that they would find solutions in the next morning with the possibility to change the hotel.
“Instead, he asked all the members of the delegation to take out their luggage, leave the hotel and spend the night outside on the ground.”
The two-star lodging in question, Hotel Aladino, has an average rating of 1.5 stars on TripAdvisor, with past guests writing about its “disappointing and dangerous” state and warning only to stay there if there’s no other alternative nearby.
Hotel Aladino did not immediately respond to CNN’s request for comment.
Upon the “intervention” of the Tunisia Federation, the players were subsequently moved to Hotel Alrawabi in Nefza, a three-star establishment around 35 kilometers away with a swimming pool and numerous positive online reviews.
At this stage the Zimbabwe team “expressed their satisfaction with an apology to the chairman of the organizational committee,” according to the Tunisian Union.

But it wasn’t only the state of their accommodation that irked Zimbabwe.
There had been earlier disputes about the squad’s treatment at the Tunis-Carthage International airport, with Zimbabwe’s former Minister of Sport David Coltart saying the players were delayed for six hours before they could leave the arrivals terminal.
Zimbabwe captain Denford Mutamangira recorded a voice note during their wait at the airport, unsure if it was a product of “mind games” from their opponents.
“We arrived in Tunisia at 11am and we are still being held up at the airport because of some visa fee and right now it’s ten to 5pm,” said Mutamangira.
“They’ve confiscated our passports and say we will not get them until that fee has been paid. We are stuck and we are not sure if it’s poor organization on our end or if it’s mind games that they’re playing with us. But we should have been at the hotel right now with our feet up.”
But, in a statement, the Tunisian Federation said Zimbabwe knew several weeks ago that the visa fees were required, blaming the team manager for the long wait.
“The team manager refused to pay the visa fees to enter the Tunisian territories under the pretext that he did not have the amount, knowing full well that the Tunisian Federation had previously alerted Rugby Afrique by mail on June 8, 2018,” added a Tunisian Federation spokesperson. 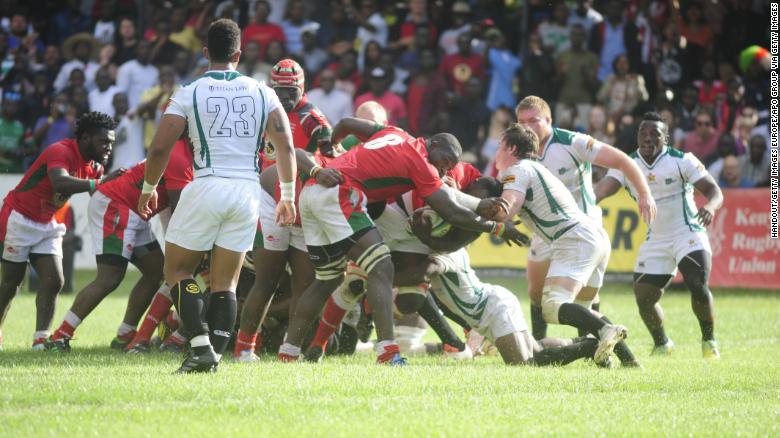 Zimbabwe in action against Kenya on June 30.

Zimbabwe flanker Takudzwa Mandiwanza insisted the trip had been “an absolute shambles” from the start, saying the players had not been paid since another Gold Cup match against Kenya on Saturday June 30.
“Look, we have not been paid our daily allowances for our duration in Kenya, including our match fees,” said Mandiwanza in a similar voice recording. “Now we’re in Tunisia and we’ve been detained at the airport for close to six hours. Again, no allowances were given to us.”
Mandiwanza went on to thank head coach Peter de Villiers, formerly of South Africa, for “buying sandwiches, a few drinks and some water with his own personal money.” 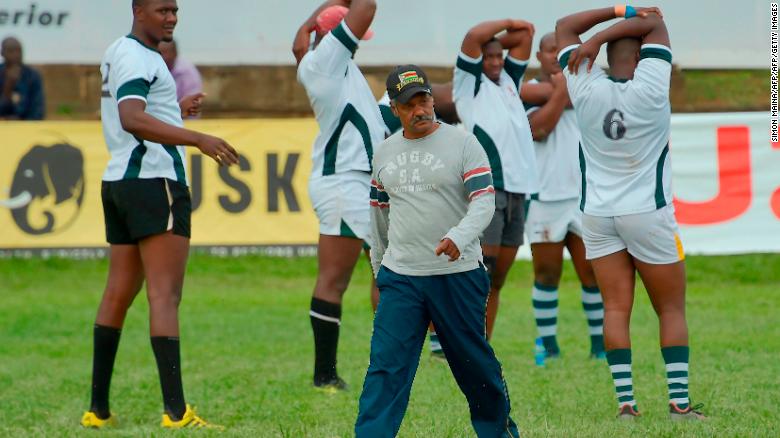 Peter de Villiers puts the Zimbabwe players through their paces.

“Look, I mean honestly, [otherwise] we all would be hungry right now,” Mandiwanza lamented. “The situation right now is very disheartening and frustrating to be quite honest.
“So yeah, we just need some changes to be [made] at the current moment. If there are people willing to come support us and fight our battle while we’re away, that’s more than appreciated.
“In terms of on the field, we’ll try and handle business. But look, we need some help here right now because things are tough at the moment.”

‘They need to come to the party’

New Zimbabwe Rugby Union president Aaron Jani, a former Sables winger, told Harare radio station Capitalk FM that the delay in paying allowances and match fees came about because of the difficulties involved in obtaining foreign currency, insisting the money has since been deposited in the players’ accounts.
“When we applied for some foreign currency for allowances for our players, the banks simply did not have the money,” claimed Jani.
“The players do know this. And so what we said is: ‘Look, gentlemen, we cannot give you the foreign currency right now, but what we will do, is we can pay the money into your accounts … Takudzwa….has actually been paid.” 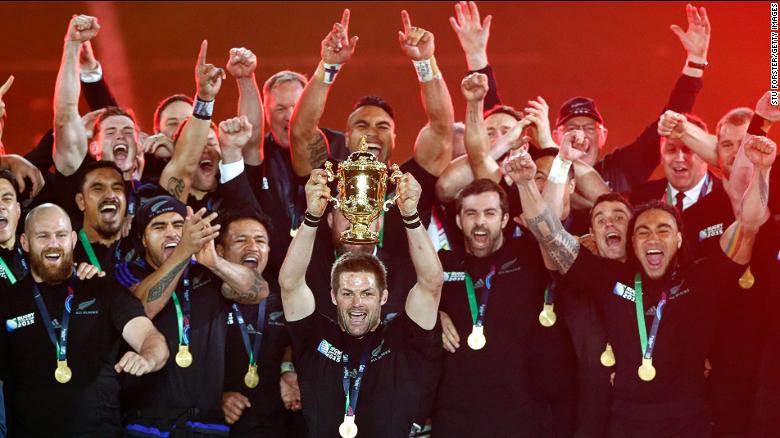 New Zealand beat Australia 34-17 to win its second straight Rugby World Cup at Twickenham Stadium, London in October 2015. Four years on, the focus will shift to Japan, where 12 stadiums throughout the country will host the tournament from September 20 to November 2.
“We are not immune to the challenges that are happening in the country,” Jani went on to stress, in reference to Zimbabwe’s economic problems. “There are foreign currency challenges and I think the players need to understand these things in terms of context and be realistic in terms of what is happening.”
“I’m actually disappointed that this has not been reciprocal in terms of our players. We haven’t seen the wins that we want to see. It’s been give, give, give, give. I think it’s time that they also come to the party and give us a couple of wins.”
Mandiwanza and the Zimbabwe Rugby Union did not immediately respond to CNN’s request for further comment.
Visit CNN.com/sport for more news and features
Zimbabwe and Tunisia occupy fourth and sixth place respectively in the Gold Cup rankings, with Namibia widely expected to top the table and advance to next year’s World Cup.
Post published in: Cricket