President Emmerson Mnangagwa desperately wants to show that he can turn the economy around and is looking for quick wins from the mining sector, which had been spooked by his predecessor’s indigenisation plans. Mnangagwa does not want to completely liberalise the sector, and the government still insists on majority local ownership for platinum and diamond mining projects. A new mining bill now making its way through parliament proposes to force mining companies to list on the local stock exchange, though foreign minister Sibusiso Moyo told an audience at Chatham House in London on 25 April that the clause would be taken out. 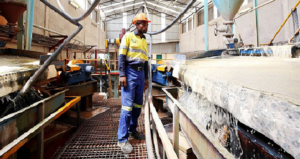 Platinum is the main focus for miners, and in March, Cyprus-based Karo Resources signed a deal with a promise of $4.2bn in investment in the Mhondoro-Ngezi region. A lot of platinum goes into catalytic converters and other devices to reduce emissions on petrol-powered cars. Analysts predict that demand for platinum will drop as car makers pour more money into hybrid and electric cars. Globally, the electric car sector is booming, boosting the demand for lithium, a key component in batteries. Four Zimbabwean lithium projects are getting underway this year.
Currently, only Bikita Minerals produces lithium, and it has an estimated 11m tonnes in its mines, which have been producing for the past five decades. Australian miner Prospect Resources leads the lithium rush with the rapid development of its flagship $55m Arcadia project near Harare. Exploration work has confirmed that the Arcadia deposit is the world’s sixth-largest Joint Ore Reserves Committee-compliant pegmatite resource, with 43.2m tonnes at a grade of 1.4% of lithium oxide in the pegmatite rock.
Drilling at Arcadia commenced in the second half of 2016. The mine and chemical plant construction are due to be completed over a 14-month period. Lithium concentrate production is expected in the third quarter of 2019.
Significant progress has also been made at Premier African Minerals’ Zulu lithium and tantalum project near Bulawayo, Zimbabwe’s second-largest city. Premier says the project potentially has the largest undeveloped lithium-bearing pegmatite deposit in Zimbabwe, with a potential exploration target of around 120m-160m tonnes.
Lithium processing
In another development, Canadian miner Chimata Gold is working with local partner Jambata Limited on the Kamativi lithium tailings project in Matabeleland North. Their next step is to define the scope of the deposits and their economic viability. They want to set up a processing plant by 2019 that will treat 400tn/hr. And, finally, another Australian company, Latitude Consolidated, announced this year that it is acquiring a majority interest in the highly prospective Mbeta lithium deposit – which has not yet been  fully explored – in Gwanda.
Figures from government-run Minerals Marketing Corporation of Zimbabwe show that Zimbabwe produced 52,127tn of petalite – a lithium ore – in 2016, valued at $12.6m, compared to 42,672tn in 2017 worth $10.4m.
Campaigners warn that the new government does not seem to be doing much better than Robert Mugabe’s government in managing Zimbabwe’s natural resources. Centre for Natural Resource Governance director Farai Maguwu tells The Africa Report: “There is no transparency at all in all the mining deals. Investors are nocturnally selected, which causes me to believe the country is not benefiting from the deals, despite lithium being a high-value mineral now.” He adds: “Mining is creating poverty. The country is mining primarily for export, and when you export raw materials, they fetch very little prices.”
This article first appeared in the June 2018 print edition of The Africa Report magazine
Post published in: Business