BLOOD TONGUE, THE MUSICAL’, an exciting collaboration between Zimbabwean and South African artists, arrives in the Zimbabwean capital this week at REPS Theatre on Friday 31 August and Saturday 01 September, from 7pm. 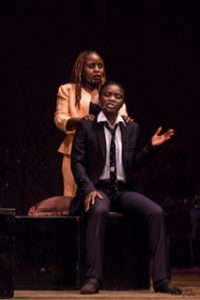 A scene from Blood Tongue 2017

Written by Christopher Mlalazi and Josh Nyapimbi, the play explores leadership accountability, the manipulative excesses of the political elite, and the struggles faced by strong-willed women in present-day Zimbabwe.

The cast of four gifted and rising Bulawayo and Harare thespians is backed by a five-piece band which brings the story to life with 14 outstanding musical pieces composed by Bafana Dladla and Tshepo Pheko (SA) and arranged by Bulawayo musician Blessing ‘Stot’ Sitotombe.  The play is directed by Bafana Dladla and Eunice Tava, and produced by Josh Nyapimbi for Nhimbe Trust.

The cast is comprised of Agnes Ncube, Dalma Chiwereva, Getrude Munhamo and Gift Chakuvinga.  Dalma plays the character ‘MaMsindo’, and she says “being able to be the voice that creates the dialogue means a lot to me.  The character I am playing is inspiring for me as a woman; to stand for what is right and to never be shaken from what I believe in”.

Getrude Munhamo, who portrays the character ‘Manotsha’, adds: “Blood Tongue has been an amazing journey for me personally and professionally.  I have learned so much from the renowned SA director Bafana, and our very own Blessing Sitotombe, who is an extraordinary songwriter and instrumentalist.  Thanks also to Josh Nyapimbi and the Nhimbe Trust Women in Theatre and Television project, which has opened the doors of possibilities and thrust me into the world of art in another dimension.  Thank you for the opportunity.”  Blood Tongue is Getrude’s second experience in the world of theatre musicals, her first being in Rent, directed by Zane Lucas.

Blood Tongue – The Musical has been staged at the Bulawayo Theatre, Masvingo’s Charles Austin Theatre, and the Artists Preserving Heritage Festival at the Emalahleni Civic Theatre, in Mpumalanga, South Africa.  The production shone brightly at the recent Bulawayo Arts Awards 2018, being nominated for Outstanding Theatre Production.  It was originally scheduled for Harare last November, but was upstaged first by events in the capital at the time, and once again cancelled in late July due to a last-minute technical glitch in respect of professional sound and lighting.

After REPS in Harare, the stirring musical will be staged at the Intwasa Festival koBulawayo at Bulawayo Theatre on 26 September, and will return to South Africa again in October for the Kwaguqa International Arts Festival.

Tshepo Pheko, one of the musical directors who is also pianist and composer from the SA group Generation2Generation, said “Blood Tongue is a wonderful show and it has a very strong message that needs to be heard across the world.  It has a wonderful cast who are willing to learn and have the heart for Art. I’m glad I had the opportunity to work with these amazing souls, creating the music for the show together with Bafana Dladla; it was a great pleasure.”

Nhimbe drives to address the key priorities of improved freedom of artistic expression, improved socio-economic status of artists, positive attitudes of society towards artists and their work, and enhanced gender equity in the culture sector.

Nhimbe’s main partner in its dynamic programmes Women in Theatre & Television (WiTT) and Children in Theatre & Television (CiTT) is Africalia, Belgium, whose motto is ‘Creativity is Life’.   The programmes have seen a number of excellent productions staged in Zimbabwe and beyond in the last few years.  CiTT scooped awards at the recent Doug Hill Schools Drama Festival in Masvingo, and members of WiTT shone at the 2018 Bulawayo Arts Awards, with several nominations and awards.  Blood Tongue – The Musical is also supported in partnership with the Dr Winterbottom Charitable Fund.