Written by Christopher Mlalazi and Josh Nyapimbi, the vibrant Zim/SA collaboration ‘BLOOD TONGUE - THE MUSICAL’, has been exciting audiences in Zimbabwe and beyond in the last few months, and its tour is now unfolding for Intwasa Arts Festival 2018, at The Bulawayo Theatre on Wednesday 26 September from 7pm. 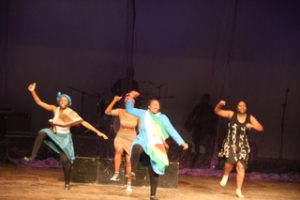 The stirring musical play explores leadership accountability, the manipulative excesses of the political elite, and the struggles faced by strong-willed women in present-day Zimbabwe.  The cast of four is backed by a five-piece band which brings the story to life with 15 outstanding musical pieces composed by Bafana Dladla and Tshepo Pheko (SA) and arranged by Bulawayo musician Blessing ‘Stot’ Sitotombe.  The play is directed by Bafana Dladla and Eunice Tava, and produced by Josh Nyapimbi for Nhimbe Trust, and was nominated for Outstanding Theatre Production at Bulawayo Arts Awards 2018.

Premiered in Bulawayo in 2017, the production has been staged at Masvingo’s Charles Austin Theatre, the Artists Preserving Heritage Festival at the Emalahleni Civic Theatre in Mpumalanga, South Africa, then on to Harare at REPS Theatre this August/September, and now to Intwasa. 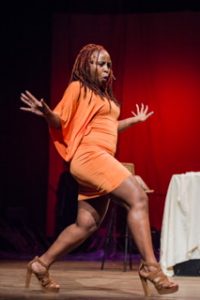 In the Harare audience was highly respected activist and former MP Ms Jessie Mujome, who said:
“I found to be absolutely… if I can say, ‘painfully’ beautiful!  I marvelled at the way that the subject matter, so dense and so painful could be expressed with such beauty.  And the dances; they were dancing our pain away!   And it left you thinking.  I thought it was absolutely brilliant, particularly with just the five cast members.  I noted it was originally a 2017 production, and the alacrity with which the recent violence was blended in, was brilliant.  This production was clearly developed before those things happened, but the whole production is a very astute directional sign about where we need to go as a nation, where we are coming from, where we are, where we want to get to.  I hope it is enjoyed by more audiences, because it really does prick the conscience, to say ‘we need to do something, right those wrongs’.  We need to ruminate.”

UZ lecturer Dr Kelvin Chikonzi commented: “I enjoyed it being a musical, it raised the standards of performance, and the way it was able to integrate technology, the microphones and sound, was really commendable.  That kind of show raises the standards; even the coordination, I appreciate the challenge of creating an ensemble of musicians, and I think that was quite good.”

The cast is comprised of the Bulawayo Arts winner ‘Lady Tshawe’ back in her award winning role; Agnes Ncube, Dalma Chiwereva and Gift Chakuvinga.  Dalma plays the character ‘MaMsindo’, and says “being able to be the voice that creates the dialogue means a lot to me.  The character I am playing is inspiring for me as a woman; to stand for what is right and to never be shaken from what I believe in”. 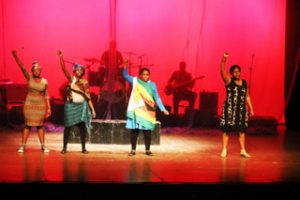 Nhimbe’s main partner in its dynamic programmes Women in Theatre & Television (WiTT) and Children in Theatre & Television (CiTT) is Africalia, Belgium, whose motto is ‘Creativity is Life’.   The programmes have seen a number of excellent productions staged in Zimbabwe and beyond in the last few years.  Blood Tongue – The Musical is also supported in partnership with the Dr Winterbottom Charitable Fund.

Nhimbe Trust have enjoyed partnership with Intwasa Arts Festival in different ways over the years, and are proud to be able to contribute to its success with such high-quality productions.  After Intwasa, Blood Tongue – The Musical will be bound, on its continuing tour, for the Kwaguqa International Arts Festival, in South Africa this October.