The Zanu PF government’s obsession and decision to evict vendors from the city centre is barbaric contemptuous and disrespectful. It is not the solution to the problems bedeviling the city and the nation at large. 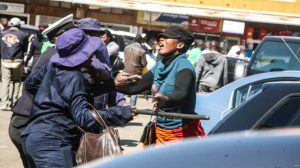 Government is simply using cholera as an excuse to victimize people in an attempt to achieve ill-conceived goals.

The MDC is against the idea of blaming the victims for every calamity that befalls the motherland.

To make matters worse the apparatus deployed to enforce the Zanu PF decision are confiscating clothes and electronic gadgets from vendors, merchandise that cannot in any scientific way transmit cholera.

These are clear acts of theft.

In an attempt to curb the spread of cholera emphasis must never be on the blame game apportioned to the vendors. Burst sewer pipes in Glen View are the source of the current outbreak which therefore must follow that the whole infrastructure of water and sanitation be overhauled and renewed.

We make this point in the Sustainable Modernization Agenda for Real Transformation (SMART).

Surveys have been done and commissioned to this effect including one by UNICEF which made it clear that government ought to have replaced the infrastructure in the 1990s.  However, the Zanu PF government never prioritized and is against resourcing local authorities for purposes of capital formation as a result of their fear of an MDC success.

Under the new constitution, the central government must finance provincial tiers of government to the tune of 5% of the total national budget.

Since 2013 this provision has been ignored, in fact, the government continues to undermine the implementation of devolution through the illegal appointment of Provincial Ministers and a deliberate reluctance to pass enabling legislation. This as well is disrespectful.

Central government, therefore, owes lower tiers of government in excess of 1,2 billion dollars since the enactment of the new constitution in 2013.

To then have a Minister of Finance who collects tax payer’s money and directs it to ill-conceived priorities and then ask the taxpayers to fund themselves out of a disaster is an insult of the highest order. An attempt to donate by people who are guilty of habitual dereliction of duty is also an insult to the intelligence of the people of Zimbabwe.

We find the state’s habit of creating a turf war between the Ministry of Local Government and the local authorities to be suspicious.  A responsible government must never issue central directives with no prior conversations with stakeholders in lower tiers of government.

We, therefore, suggest that the following be done:

1. The arbitrary eviction of vendors be stopped forthwith.
2.  An inclusive and coordinated all stakeholders approach be adopted in combating the spread of cholera.
3.  Vendors must be engaged and assisted to practise hygienic methods of conducting their business.
4.  The state, its agencies, and linked individuals must pay what they owe to the local authorities in the form of bills and rates.
5. State interference in local authorities disguised as intervention must stop forthwith.
6. Positive steps must be taken by the central government to resource local authorities for purposes of capital formation especially regarding water and sanitation infrastructure.
7. The government must implement devolution of power as provided in chapter 14 of the constitution to ensure equitable distribution of resources and ensure accurate prioritization of projects.
8. Formal and decent jobs must be created to allow vendors to go back and pursue their dreams through the provision of alternative careers and sources of income.

It must be accepted that the water and sanitation crisis in Zimbabwe is the sole source of diseases like typhoid and cholera.

We offer holistic solutions to the water crisis in Harare in the SMART policy document.
We make the point that failure to act on these and other issues now will result in infinite outbreaks, loss of life and unpalatable suffering of the Zimbabwean people.