He said: “If this goes ahead, we are looking at economic suicide. We are going to end up like Zimbabwe.”

His concerns come as South Africa’s president Cyril Ramaphosa confirmed his ruling African National Congress would try to pass a constitutional amendment to allow for the expropriation of white-owned land without compensation.

However, few white South African farmers disagree that there needs to be land reform, but they argue that if it is mismanaged then the agriculture industry would not just decimate South Africa, but the surrounding countries.

Ombre van Zyl, who heads agricultural federation that represents 28,000 famers said the consequences of these plans are obvious.

The head of Agri SA told The Daily Telegraph: “If they go ahead with expropriation, the value of land will decrease, the cost of capital will go up and borrowing will become tougher.

“Profitable farms may no longer be viable, meaning that agricultural output will go down dramatically, food inflation will go through the roof and there will be a risk of political instability.”

However, white farmers worry about expropriations going to unskilled farmers.

White farmers say there is a better way to deal with inequality that include amending existing policies to speed up the transfer of farmland to black South Africans.

The government says farms do not end up being owned by black farmers because white farmers charge too much, but the state has also bought 4,000 farms but has not been successful at handing them over to black South Africans.

One such farmer Patrick Sekwatlakwatla has applied for a farm from the state every year for nearly two decades.

He says the problem is that the government hands farms over to those who are politically connected rather than to people like him who have years of experience working on white-owned farms. 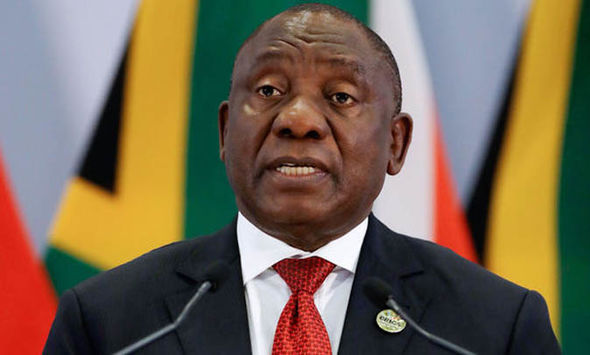 Cyril Ramaphosa had said his ANC party would pass an amendment to the country’s constitution(Image: GETTY)

He said: “They give land to Gucci farmers who turn up on their land with crocodile-skin loafers, driving Porsches.

“How do you expect them to make a success of it? They don’t even live on their farms. This is not what a farmer is.”

Furthermore, many black South African farmers cannot hold the titles deeds of their land, cannot access the bank loans necessary to develop a successful farm and cannot leave their farm for their children to inherit.

All of these reasons contribute to why many black farmers have given up.

Nick Serfontein rears cattle on 15,000 acres of pasture in the Free State province and launched a training programme for black farmers to team them the basics of husbandry.

His programme was launched independently of the government to train 660 black “emerging” farmers.

He said that it is pragmatic to train these “emerging” farmers because if they can produce healthy cattle, then he can buy them and they both will profit.

He said: “Emerging farmers have been through Hell. They’ve been forsaken by the government, mainly due to corruption and lack of political will and leadership.

“We can fix the problem ourselves, if the government stays out of it.

“We realise the situation has got to change. There are thousands of famers on the market and there are so many possibilities to form partnerships with emerging famers.

“We can all succeed.”

Enforced land expropriations have rarely been successful and has been a signification factor in collapsing the Venezuelan and neighbouring Zimbabwean economies.

The uncertainty of these plans have already contributed to a 15 percent fall in the value of the South African rand and it could threaten a banking crisis as the banks hold £8billion in commercial farm debt.

Farming feeds up to 120million people in South Africa, the only country along with Gabon in Africa that can feed itself, and its neighbouring countries, according to The Daily Telegraph.