The death of JOHNNY RODRIGUES…. It’s night time in Australia right now. All day I’ve been trying to come to terms with this news. Johnny told me a few months ago about the extent of his illness, but in typical Johnny style, seemed more concerned about my health than his. He wrote to me: “Don’t worry, we are both experienced fighters” – and …. “A luta continua”…. “the struggle continues”. 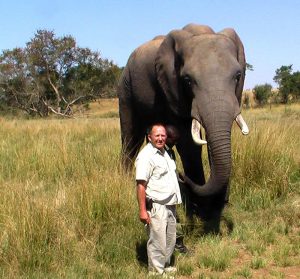 You will have read about Johnny in ‘Elephant Dawn’. I knew him since 2001 when I first arrived to live in Zimbabwe. Referring to the 10 years following, I wrote in Elephant Dawn: “Johnny has been the only person inside the country [Zimbabwe] who has been brave enough to distribute regular bulletins about the plight of the wildlife. He has endured extreme criticism, death threats and the attention of the dreaded CIO…. Without Johnny even those of us inside Zimbabwe would be aware of far less going on around the country.”

Johnny was a warrior for Zimbabwe’s wildlife, always trying to ensure that the unscrupulous got away with nothing. So many in Zim relied on him to get distressing wildlife information out. He was harassed continually and died in exile in Portugal. His beloved wife Cheryl, 59, also a dedicated wildlife conservationist, died in Harare in 2016 of brain cancer….. Stress does terrible things.

Johnny’s last words to me were “I miss you”. More than anything, I think that Johnny missed his beloved Zimbabwe – and missed those who fought for the Zim wildlife he loved so much.

Johnny died of colon cancer in his 60s. And no doubt too of a broken heart.
Gone too soon.
Fly high JR. We’ll miss you.