HARARE (Reuters) - Zimbabwe is donating 10 white rhinos to Democratic Republic of Congo to re-establish a population driven to extinction by poachers a decade ago, Zimbabwe’s wildlife authority said. 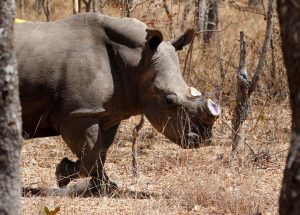 FILE PHOTO: A white female rhino named Carol is seen after she was dehorned by the Animal and Wildlife Area Research and Rehabilitation (AWARE) at Lake Chivero Recreational Park in Norton, Zimbabwe August 25, 2016. REUTERS/Philimon Bulawayo/File Photo

The rhinos were being captured and would be moved from Victoria Falls later this week or early next, Zimbabwe Parks and Wildlife Management Authority (ZimParks) spokesman Tinashe Farawo said on Monday.

Congo’s white rhinos lived in Garamba National Park near the border with South Sudan but it was not clear where the animals would be located.

Wildlife protection is complicated in Congo by lawlessness and militia violence that endures 15 years after the end of a war that killed millions, mainly from hunger and disease.

“The Zimbabwean Government was satisfied that the pre and post-translocation conditions in … (Congo) met the requisite standards for a successful re-establishment of rhinos,” a ZimParks statement said.

ZimParks and conservationists said moving the rhinos from Zimbabwe would strengthen the gene pool. Zimbabwe had about 800 black and white rhinos in 2016 and is one of just four countries with nearly all the world’s white rhinos.

Their horns are prized in China and southeast Asia.

“Moving rhinos from one place to another is essential to ensure good genetic diversity across the population,” said Emma Pereira, a spokeswoman for Save the Rhino, a London-based group. “We hope any move between countries is done with the correct expertise and thoughtful planning.”

Poachers also target mountain gorillas, one of the world’s most endangered species which is found only on a spine of volcanic mountains straddling Congo, Uganda and Rwanda.

Their numbers have recovered in recent years thanks to intensive conservation efforts.