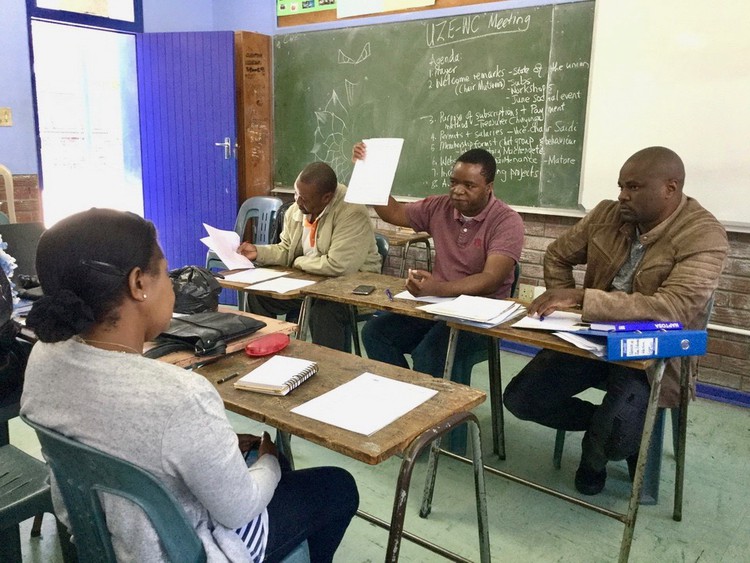 Chairperson Jack Mutsvairome (centre), with publicity secretary Kudzi Muchengete (on his right) and vice-chairperson Ibrahim Saidi (on his left) addresses a meeting of the Union of Zimbabwean Educators Western Cape in Parow.

Hammond said failure to verify a permit‚ which may later be found to be fraudulent‚ could result in WCED officials or school principals paying a hefty fine or facing imprisonment. She said Home Affairs had found fraudulent permits.

Jack Mutsvairo‚ chairperson of the Union of Zimbabwean Educators Western Cape‚ established in 2016‚ said the union had 50 members and a WhatsApp group of 200 teachers. He said the union was irritated by the verification process.

“If banks take less than a week to do it‚ why is the WCED taking months? “Some of the Zimbabwean teachers‚ who come to us claiming they haven’t been paid for between three to nine months‚ tell sad stories‚” said Mutsvairo.

Some‚ he said‚ had got into debt borrowing money for rent‚ food and their children’s school fees. Mutsvairo said some teachers suffering from delays did not engage the union as they feared victimisation if they spoke out about having not been paid.

A man who teaches mathematics and physical science to Grades 11 and 12‚ said he had been without a salary since January‚ awaiting his ZEP.

On August 3 he collected his permit and submitted it to the department‚ but he had still not been paid as the department was waiting for Home Affairs to verify the permit.

On Tuesday‚ Hammond told GroundUp his permit had now been verified and his outstanding salary would be paid into his account by the end of the week. Home Affairs did not respond to a request for comment.