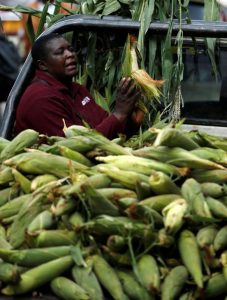 A women sells maize fom the back of her truck in Harare, Zimbabwe, November 29, 2017. REUTERS/Siphiwe Sibeko

AMA, a government agency tasked with marketing agricultural produce, will raise the money to buy the grain through, the Grain Marketing Board, which is a separate state entity, CBZ said in a statement.

Grain bills are bonds specifically meant for purchasing maize and are guaranteed by the Zimbabwean government.

Zimbabwe’s maize output is estimated at 1.7 million tonnes this year, down from 2.15 million tonnes in 2017, according to the United Nations Food and Agriculture Organisation.