Source: Meet Boswell – the Zimbabwe elephant turned YouTube star – Telegragh Deep in the heart of Mana Pools National Park, in the shade of a mighty winter thorn tree, an old bull elephant is flapping his ears to keep himself cool. It’s August in the Zambezi Valley and at last the seedpods, an irresistible 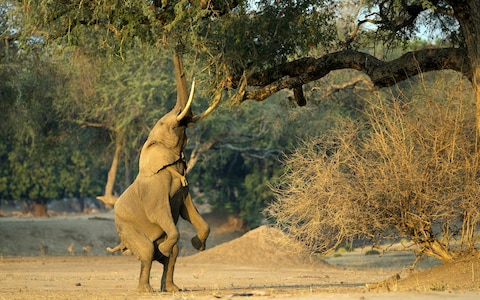 Boswell has become something of an internet sensation CREDIT: CEDAR TREE MARKETING AND PUBLIC RELATIONS

Deep in the heart of Mana Pools National Park, in the shade of a mighty winter thorn tree, an old bull elephant is flapping his ears to keep himself cool. It’s August in the Zambezi Valley and at last the seedpods, an irresistible delicacy for elephants, are ready to eat.

Most elephants wait for baboons to shake down the ripe fruits and then scoop them up from the ground; but not this bull. Almost uniquely over the years he has learned how to stand on his hind legs like a circus elephant to pluck the most succulent pods with his outstretched trunk. And in doing so he has made himself a YouTube star. Meet Boswell – the most famous elephant in Zimbabwe.

Mana Pools is a land of giants, of colossal trees and huge elephants that live by the banks of the mighty Zambezi, and is home to two legendary veterans: Boswell, named after a famous South African circus because of his unique feeding habits, is one; the other is John Stevens, Zimbabwe’s most respected safari guide. Both have been wandering around Mana Pools for close on half a century, during which time they have become increasingly reliant upon each other for their survival.

Ask anyone for a list of Africa’s finest safari guides and John Stevens’ name will come out near the top. Although now aged 70, he has lost none of his boyish enthusiasm for nature, and being on safari with him in Mana Pools is like watching a kid let loose in a sweetshop. “I love this place,” he declares, spreading his arms to encompass the view from his camp on the Zambezi floodplains. “And as for walking, there is nowhere like it anywhere in Africa.”

As you might expect from such a safari aficionado, John’s Camp (now part of the Robin Pope Safaris portfolio) is a genuine canvas bush-camp, stripped of all trivia but unsparing when it comes to providing the essential luxuries: comfortable beds, hot bucket showers and al fresco dining under the stars. After dinner, sitting around the campfire while hippos honk out on the floodplains, he describes how the park used to be before the poachers moved in and finished off the black rhinos. “The last one I saw was back in 1992,” he says, “and that’s when the poachers turned on the elephants.”

Now John is determined that they shall not follow the rhino into oblivion. That is why with Nicci, his wife, he helped to establish the Zambezi Elephant Fund in 2015. “Our elies are in real danger,” he says. “We just can’t let them disappear on our watch.”

It soon becomes apparent that Stevens and his fellow guides need elephants such as Boswell to attract the tourists upon which their livelihoods depend, while big tuskers like Boswell need the Zambezi Elephant Fund to protect them from the poachers who have wiped out more than half of all elephants in the Valley since 2001. It is symbiosis.

When Boswell was born, John was working for Zimbabwe’s national parks department as the warden of Mana Pools, leading anti-poaching patrols, building access roads and developing its tourist infrastructure. About that time he remembers seeing a magnificent bull elephant with huge tusks that must have weighed about 100lbs each, and wonders if this was Boswell’s father. “It would be nice to think so,” he says, “especially as that old fellow, too, would often rear up on his hind legs to reach the seed pods in a manner few other elephants had mastered.” In 1981, John left the parks department to build Chikwenya Safari Camp at the north-eastern end of Mana Pools, and four years later he struck out on his own to become one of Zimbabwe’s first private safari guides. As for Boswell, he was now a stroppy teenager being chastised by the herd matriarch and play-fighting with other young bulls.

For John the Nineties were the heyday of his guiding career in Mana Pools, leading his guests on canoe trips down the Zambezi and tracking the last of the black rhinos in the jesse bush – a colloquial name for the dense blanket of bone-dry scrub that covers the park’s trackless hinterland. Boswell, meanwhile, had become sexually mature and was now entering his prime, a magnificent tusker whose appearance was in no way diminished by the loss of half his tail – perhaps bitten off by a crocodile.

But in 2002, following years of political instability under President Robert Mugabe, Zimbabwe’s tourism industry crashed. One or two operators refused to budge from Mana Pools, including Andrew “Stretch” Ferreira, whose presence deterred the poachers and helped to save the lives of some of the park’s bulls such as Boswell; but business was so bad that John decided to move his safari operation to East Africa.

During this time, many elephants related to Boswell were probably gunned down for their ivory, and Boswell himself would have been a prime target; but miraculously, when John returned, the big tusker was still there.

Just as Boswell can be recognised by his stumpy tail and unique feeding habits, John Stevens is recognisable by his broad-brimmed, old-time hunter’s hat. “It’s actually Australian,” he says, “an Akubra my daughter bought for me.”

Now, impeccably turned out in his neatly ironed shorts and bush shirt, he leads me into the park that is his spiritual home. Mana Pools is a pristine wilderness larger than Surrey and became a Unesco World Heritage site in 1988. The Zambezi, the fourth longest river in Africa, runs along its northern border, forming a natural barrier between Zimbabwe and Zambia.

Mana means “four” in the local Shona language and refers to a quartet of oxbow lagoons; but the park’s greatest glories are the woodlands that grow at the edge of the floodplains. All around us the tall trees reach for the light; sausage trees with pendulous, fruitlike green salamis, strangler figs with gasometer girths, and groves of Natal mahoganies whose neat browse lines have been clipped by the nibbling mouths of kudu antelopes. But most impressive of all are the majestic glades of winter thorns.

Arching overhead like the tracery of a cathedral, their branches create aisles of dappled shade in which herds of impala flit away at our approach, and this is where we spend most of our time searching for Boswell.

Having turned up at the beginning of the week he has since disappeared, and the word is that he is now in musth, pumped up with testosterone and looking for a mate in the jesse.

This is where the elephants like to hang out until the heat builds up and there is a general movement towards the woodlands. First come the breeding herds of cows and calves and then the solitary bulls, all lured by the promise of water and a feast of those sought-after seedpods.

But there is more to Mana Pools than Boswell, as I discover when John takes me down to the Cheruwe river, on whose banks a seven-strong pack of highly endangered wild dogs have made their den.

The bush is thick and John has his rifle at the ready in case we bump into one of the cantankerous, old buffalo bulls known as “dagga boys”. His rifle is a 470-calibre, double-barrelled Army & Navy model, with bullets the size of chipolatas. “If you need a rifle you need it badly,” he says, “and you need one with enough stopping power to do the job.”

We sit and wait, and in a little while we hear a gruff bark followed by the excited twittering of the puppies as the dogs return, regurgitating the remains of an impala they have killed on their early morning hunting foray.

Back in camp, I watch the sky change colour from apple green to burning orange as the sun vanishes behind the escarpment on the Zambian side of the river, its 4,000ft contours outlined in slate, like the silhouette of a sleeping warrior.

That night I awake in the small hours to hear the Nyamatusi lion pride roaring in the starlight, and in the morning, after a quick coffee and a bowl of porridge, we go to look for them. The sun is barely over the horizon and already a million Cape turtle doves are exhorting the world to work harder, work harder, as we make our way cautiously through head-high stands of aptly named adrenalin grass; but the cats are long gone.

Never mind. We pick up their tracks again next day, freshly imprinted on a dusty game trail and follow them across an open plain of yellow grass. Their fresh pugmarks reveal the passage of eight lions: an assortment of lionesses and yearling cubs.

For more than an hour we pursue them, walking slowly through the spiky thickets with John providing a master class in the art of tracking. It’s obvious we are hot on their heels when he points out a tuft of dry grass that has been flattened under their feet – and is now slowly rising. He turns and gives me a grin of sheer delight. “Isn’t this marvellous,” he says. “For me it’s absolutely the best thing in life.” But when we reach the near-impenetrable jesse bush he holds up his hand. “Don’t think we’ll push them any further,” he says. “It’s so thick in there we could walk right into them.”

Afterwards, tucking into a picnic lunch and a long cold drink, I’m still mentally re-playing the oh-so-special experience of tracking big cats with this extraordinary man, and I think to myself: if anyone can save Boswell and his kind from the poachers, it is surely John Stevens and the Zambezi Elephant Fund.

Brian Jackman’s visit to Mana Pools was arranged by Steppes Travel (01285 601 050; steppestravel.com), which offers an eight-day itinerary to Zimbabwe from £3,995 per person based on two people sharing, staying at John’s Camp in Mana Pools and Victoria Falls and including international flights with Ethiopian Airlines (ethiopianairlines.com), internal flights and transfers.

For more information about the Zambezi Elephant Fund, see zambezielephantfund.org.