Zimbabwe's growing economic crisis, which has sent consumer prices spiraling upward and created shortages of everything from gasoline to medication to fried chicken, is shaping up to be the first major test for Zimbabwe's new president, Emmerson Mnangagwa, who was sworn in barely two months ago. 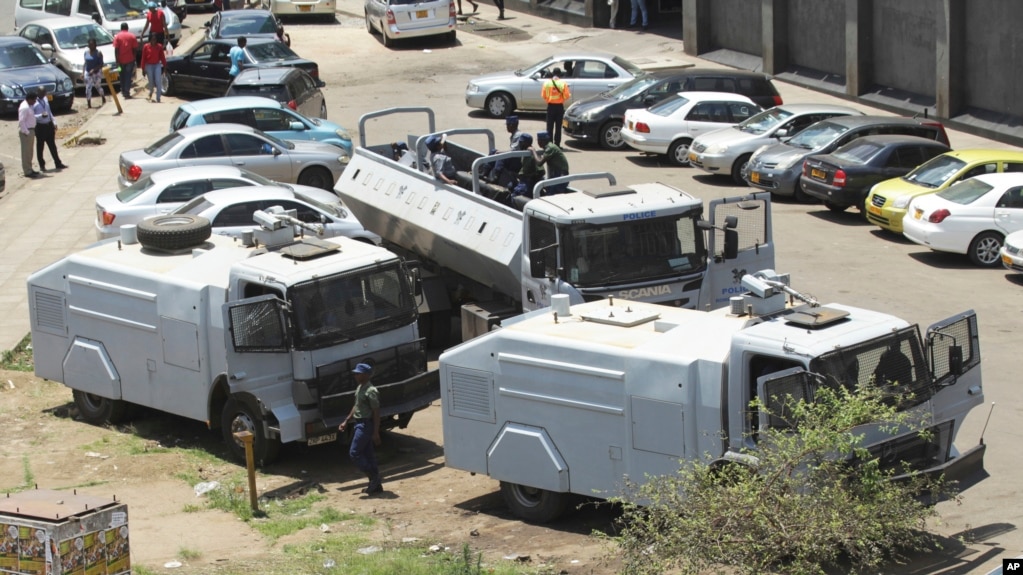 FILE – Zimbabwean riot police with water cannons are seen parked in Harare, Oct. 11, 2018. Lawyers say police in the country have arrested dozens of trade union members ahead of a planned protest in the capital over the worst economic crisis in a decade.

And the arrest this week of dozens of trade union members who planned to protest economic conditions has escalated the situation from economic trouble to a wider, more unsettling problem, activists say.

“What is worrying is the issue of not tolerating dissent at any given time,” said Lizwe Jamela of Zimbabwe Lawyers for Human Rights, who said his organization had counted, by Friday, the arrests of 42 union members who planned to protest the economic free fall that has, in just a week, seen long queues at gas stations, dire shortages of medication at pharmacies, and supermarkets limiting customers to one beer each.

Mnangagwa, who took over last November after the army pushed longtime leader Robert Mugabe to resign, won July’s poll amid promises to fix the economy after decades of mismanagement under Mugabe. Earlier this month, his government announced a new 2 percent tax on money transfers, plus a plan to float the nation’s unpopular U.S.-dollar-pegged bond notes. Those announcements led shops to hike prices and prompted consumers to attempt to stockpile goods.

“It’s a real test in that what he is going to do will determine the trajectory of the political economy,” Lawrence Mhandara, a political science lecturer at the University of Zimbabwe, told VOA.

Years of financial mismanagement, coupled with the pressure of international sanctions, led Zimbabwe to retire its currency in 2009 and replace it with the U.S. dollar. The recent attempt to reintroduce a local currency has not been met enthusiastically, despite severe shortages of foreign currency.

“The situation is so bad that the austerity measures announced by both the fiscal and monetary policies triggered a wave of inexplicable price hikes, which has eroded incomes, shop closures and shortage of basic commodities due to panic buying,” Mhandara said. “The memories of the 2008 crisis are haunting the population.”

But Jamela, of Zimbabwe Lawyers for Human Rights, said the economic story was overshadowed by bigger concerns about human rights.

Multiple calls to the Harare office of the Zimbabwe Congress of Trade Unions were not answered Friday.

Police have said they can’t allow public gatherings because of health concerns. A recent cholera outbreak killed more than 30 people in the capital, and the government issued a ban last month on large gatherings to try to thwart the highly contagious disease.

Derek Matyszak, a Harare-based analyst from the Institute of Security Studies, said mistrust in Zimbabwe’s government has made the situation worse.

“People were very angry about [the government’s economic measures], particularly as this announcement came at the time that a lot of corruption was being exposed in the newspapers,” he told VOA. “So people got the feeling that they were being taxed in order to pay for the lavish lifestyles of government officials.”

‘No need to panic’

Mnangagwa assured followers on Twitter that “there is no need to panic.” He added, “The government is guaranteeing the availability of all essential commodities.”

And Matyszak said the government has tried to stabilize the situation, by saying it had secured a $500 million loan that would give strength to the Zimbabwean bond note, and by assuring citizens that it was importing essentials like fuel.

“The question is whether this is just a little blip — it’s a panic, which is going to settle down — or whether it’s going to be a chronic malaise and this situation is going to continue,” he said. “We’ll discover that in the next week or so.”