Harare ‑ The Zimbabwean government has de-dollarised the economy by reintroducing local currency bank accounts, which will be traded in electronic transfers and bond notes only. 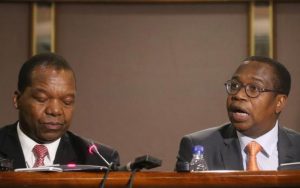 The new measures, outlined during the 2018 monetary policy statement on Monday by Reserve Bank of Zimbabwe (RBZ) governor John Mangudya, also saw more taxes being piled on the transacting public.

All mobile money transfer platform users will now be charged two cents for every dollar for a transaction, on top of the five cents flat charge per transaction.

The central bank also issued a directive that will see all foreigners and vehicles in transit paying for goods and services in foreign currency.

“Following developments in the fuel and retail sectors, RBZ directs that, with immediate effect, all foreigners will pay for goods and services in Zimbabwe in foreign currency,” the central bank governor said.

Furthermore, Mangudya who reviewed upward Zimbabwe’s economic growth to 5% from the earlier projected 4.5%, said all offshore investments were required to repatriate all proceeds to Zimbabwe.

The banks have up to October 15 to implement the directive and Mangudya said the move was meant to encourage exports and remittances.

At the same presentation, it was revealed that Zimbabwe’s internal debt has widened from US$275.8 million to $9.5 billion as government continued to borrow from the local market to finance socio-economic development programmes.

Presenting fiscal measures meant to curb low economic growth, Ncube blamed the huge debt on a number of challenges, which he said required a new approach and called for urgent reforms.

“At the centre of the above challenges is the unsustainable high budget deficit. This challenge has had destabilising implications not only to the financial sector but to the rest of the economy,” he said.

“These challenges are, however, not insurmountable. These challenges call for urgent reforms. It cannot be business as usual. Bold decisions need to be taken on the reforms front in order to stimulate growth and sustainable development.”

He said the financing of the deficit was mainly through domestic borrowing with the use of instruments such as Treasury Bills, overdraft with the central bank, cash advances from central bank, arrears, and loans from the private sector.

“The high deficit has ignited expansion of domestic debt from US$275.8 million in 2012 to current levels of US$9.5 billion against US$7.4 billion external debt. This brings total public debt to US$16.9 billion,” Ncube said.

To mitigate the challenges, Ncube proposed that government limits its overdraft with the central bank, which he said stands at US$2.3 billion, well above the statutory limit of US$762.8 million.

“Government will effectively limit the use of the RBZ [Reserve Bank of Zimbabwe] overdraft facility and curtail RBZ advances to government in line with section 11(1) of the Reserve Bank Act [Chapter 22:15], which states that borrowing from the reserve bank shall not exceed 20% of the previous year’s government revenues at any given point,” he said.

The finance minister said government, in its management of domestic borrowing, was reviewing the use of treasury bills (TBs) in support of socio-economic development programmes.

He said this was a sharp increase compared to 2014 when the TBs to gross domestic product ratio was at 4.4%.

“This is a cost to government. Excessive issuance of short-term debt instruments at high interest rate also crowds out the private sector and compounds the increase in government recurrent expenditure,” he said.