Zimbabweans have reacted angrily to a picture of President Emmerson Mnangagwa being vaccinated against cholera in Harare. 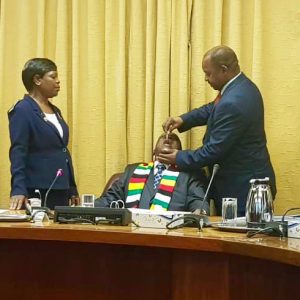 “There is no bad time to get your cholera vaccine, even during a cabinet meeting! We have embarked on a vaccination drive to help protect our communities from this disease, and we encourage those in high density areas to get vaccinated,” read part of Mnangagwa’s tweet.

But Zimbabweans took a swipe at the president, saying he should instead focus more on fixing the country’s economic crisis.

According to the state-owned Herald, Mnangagwa and his cabinet were on Tuesday vaccinated against a deadly cholera outbreak which has killed more than 50 people in recent weeks.

The move was aimed at encouraging citizen to accept vaccination in the fight against the deadly diseases.

The vaccination was carried out by Health Minister Dr Obadiah Moyo, Epidemiology and Diseases Control Director in the Ministry of Health Dr Portia Manangazira as well as other senior health officials.

Mnangagwa was the first to be vaccinated and was followed by his deputy Kembo Mohadi, defence minister Oppah Machinguri- Kashiri and chief secretary to the president and cabinet Dr Misheck Sibanda, the report said.

Several other ministers were also vaccinated.

Speaking after receiving his vaccination, Mnangagwa said the country’s leadership should lead by example.

“My cabinet is composed of listening ministers and servant ministers and they hear the voice of advice from our minister of health that it is necessary that our people get this dose as prevention to cholera. This is the first round, there is a second round.

“We as cabinet have said let us lead by example. When we go out and say we are listening leaders, we are servant leaders, we must demonstrate that by actually participating in the exercise now unfolding among our people,” Mnangagwa was quoted as saying.

There is no bad time to get your cholera vaccine, even during a cabinet meeting!
We have embarked on a vaccination drive to help protect our communities from this disease, & we encourage those in high density areas to get vaccinated.
Let’s work together towards a healthy Zimbabwe pic.twitter.com/p7SgCYozSD

But, following his vaccination some social media said that cholera vaccination was the least of their worries as basic commodity prices escalated.

Zimbabwe’s moribund economy has hit new lows in recent days with shops struggling to stock shelves, prices of goods such as cooking oil rising rapidly due to panic buying and long queues outside petrol stations.

A 2c tax for every dollar of electronic payments was introduced recently as Mnangagwa sought to revive the debt-ridden economy.

Dear Comrade Emmerson Dambudzo Munangagwa 1. Accept Defeat and be an Opposition Party just once…2. Respect the Will of The People of Zimbabwe ???? and step down3. Pave way for a new Government led by Nelson Chamisa.4. Vanhu vatambura because of your grip of power

Even in a bread queue witnessed today in Epworth? pic.twitter.com/aHGDcwJeIq

May you do something on prices Cde President, that’s where the war is now. I think cholera is being won. How can a kg of beef cost $14? That’s too much for an ordinary person who is earning less than $250

Pliz comrade in the name of Christ and all that’s good, can you vaccinate the economy coz where we headed, it looks like cholera will be the least of our worries with forex rates going ballistic on an hourly basis

You should have kept those USDs instead of getting your ex-japWhat did you do to get USD into this country? Nothing!Give @edmnangagwa some time not kungovukura

One vaccine wasted there. Cholera does not affect wealthy people.

A healthy Zimbabwe needs of latest medical technological advancements. The facilities continue to deteriorate , SB and Chiwenga are receiving first class treatment in SA, what about the millions of Zimbabweans who can’t afford such. You promised modern healthcare please deliver.

How about supplying us with clean water as taxpayers

Sir, this is not fair to Zimba bweans. The same Mazoe is on promotion in most Botswana shops. Average rate BWP 11 to 1USD. Bottled by Schweppes Zimbabwe Limited, 67A Woolwich rd, Willowave pic.twitter.com/UueCbGy64o