AS TOURISTS RETURN TO VICTORIA FALLS 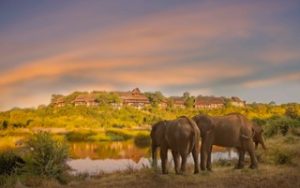 Africa Albida Tourism is celebrating its busiest year ever, as tourists flock to Victoria Falls, with its flagship property Victoria Falls Safari Lodge enjoying 80-plus per cent occupancy over the past six
months.

In the year to September 30, occupancy at Victoria Falls Safari Lodge, Africa Albida Tourism’s (AAT)
flagship property, was 81.5 per cent, compared to 71.7 per cent over the same period last year, and
similarly, across ten hotels measured in the resort town, year on year occupancy rose from 53.6 per
cent to 58.7 per cent.

Ross Kennedy, AAT chief executive said, “The new Victoria Falls Airport, with its geographical hub
location, plus much enhanced route access and connectivity, has played a part in the growth of the
destination”.

In addition, Victoria Falls Safari Lodge had its busiest August ever this year, with an occupancy rate
of 88 per cent.

This comes as AAT upgraded some of its properties, introduced new activities, expanded its already
extensive corporate social responsibility program and took home several national awards.
Victoria Falls Safari Club underwent a $600,000 redevelopment in March which included the
addition of a swimming pool, sundeck and gazebo, and an expansion and upgrade of its central
building, which doubled the size of its existing deck, increasing the lounge space, and creating a new
restaurant, with a dedicated kitchen.

A fitness room with six free-standing exercise machines, as well as weights, a bench and exercise
balls was built at Victoria Falls Safari Lodge, boasting an unrivalled view of bushveld to the horizon,
with the opportunity to spot wildlife at the onsite waterhole.

The sunset-facing glass-fronted fitness room opened in September, as part of a $150,000
redevelopment, which also included the replacement of the decking at the Victoria Falls Safari Lodge
swimming pool directly above the new fitness room.

The value-for-money Lokuthula Lodges also underwent an upgrade, which included the installation
of air-conditioning and new queen size beds in the main bedrooms, and soft refurbishments in the
living areas.

Both Victoria Falls Safari Lodge and Ngoma Safari Lodge underwent soft refurbishments, which
included an update and refreshment of the interiors.

In September, $30,000 was raised through the Victoria Falls Anti-Poaching Unit (VFAPU) golf day,
coordinated, hosted and sponsored by AAT, bringing the total raised through this annual event over
the past seven years alone to nearly USD150,000.

In 2018 AAT launched Victoria Falls Recycling to protect the environment around one of the Seven
Natural Wonders of the World, by recycling as much waste as possible, thereby reducing the volume
of litter on the streets and going to the Victoria Falls dumpsite.

The project is co-ordinated by well-known conservationist Charlene Hewat, who was appointed as
consultant to AAT’s corporate social responsibility program.

Local hotels, retailers and residents are participating in the initiative, which is recycling plastics and papers, and is set to expand to include glass and beverage cans in due course. Victoria Falls Recycling is a partnership with Greenline Africa Trust, PetrecoZim and Victoria Falls Municipality.
As part of AAT’s commitment to reduce plastic, and to minimise its carbon footprint, the group is
about to introduce the environmentally friendly Natura water system, where water is purified onsite
using a three-stage filtration system. Impurities are removed to produce top quality, great-tasting
water, provided to guests in glass bottles, which will then be left behind for the next guest to use.
The year began with AAT winning two prestigious Zimbabwe Council for Tourism awards, with
operations and finance director Nigel Frost being named Tourism Personality of the Year in
recognition of successfully spearheading a campaign by the tourism sector to reverse the application
of backdated VAT to hospitality billings in the country. In addition to this award, AAT also won the
Achievement in Marketing Award for the Africa’s Living Soul tourism survey, which provides tourism
data of the Victoria Falls region.

Last week AAT was named Recycling Champion of the Year by the Corporate Social Responsibility
Network Zimbabwe in recognition of the Victoria Falls Recycling project.