“Spirited, stunning, lively” are some of the comments from the audience that attended the “Thanks be to God - Deo Gratias” Concert held recently at the Arrupe Jesuit University in Harare, Zimbabwe. The Concert was hosted by Young Zimbabwean Catholics known as Ignite Youth Choir working under the auspices of the Jesuit Youth Ministry. 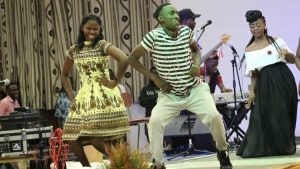 A gratitude musical concert to say ‘Thanks be to God!’ was the inaugural Deo Gratias Concert precisely about young people giving thanks to God and expressing their gratitude for all his blessings in a musical and artistic form.

Hosted by the Ignite Youth Choir, whose members are drawn from various parishes and from Magis Zimbabwe Network, the concert attracted a huge crowd who were treated to a variety of voices and instruments representative of worship and praise songs.

Jesuit Youth Ministry delegate, Fr Ignatius Padya SJ expressed his gratitude for the committed youths who desire to evangelise and celebrate their talents through art.

The audience enjoyed the joyous and prayerful performances from the hosts, the Ignite Youth Choir and music by other choirs that serenaded the audience. These included Magis Zambia, Magis Southern Africa and Magis Mozambique.  Also performing on the evening were Fr. Moreblessing Musakatiza and a Redemptorist priest, Fr. Kofi Ampoma Gynkaye CSSR.

Fr Moreblessing, popularly known as Fr Mobie expressed his gratitude to the organisers and audience.

Young people expressing themselves through art

“It was an honour being part of and performing at the Deo Gratias Concert. The experience was awesome. Given that we are all musical beings, such platforms are important because they somehow help the youth to express themselves freely through art.”

Speaking after the event, the lead vocalist for Magis Mozambique, Bernadette Matagala said the concert was outstanding.

“At first I was very scared to go on stage…When I did, I felt the great affection of the audience. I felt at home.”

Other participants said they learned from others and had been significantly enriched by the experience.

Diversity within the Catholic Church

“I want to applaud the organisers of the Concert that has brought young talented people from as far as Zambia and Mozambique and other youth groups within our country. As a Catholic, I am proud of what you are doing,” she said.

Simon Mzungu the Programmes Coordinator for Ignite Youth Choir appreciated the diversity that exists within the Catholic Church from country to country as exhibited through the Concert.

“It showed us how the Church had a lot of energy through the youth and showed a lot of light and life for the future church,” Mzungu observed.