HARARE-The Parliamentary Committee on Environment, Water, Climate and Hospitality Industry has adopted recommendations by Zimbabwe Lawyers for Human Rights (ZLHR) and some Harare residents on measures to preserve wetlands. 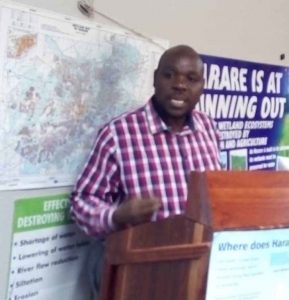 A report presented to Parliament by the committee in June 2018 comprehensively captures the recommendations made by ZLHR, Blue Agenda, Dzivarasekwa Residents Trust and Budiriro Water Foundation opposing developments on wetlands in their areas.

Such developments are often undertaken without due regard to the importance of wetlands as central government and local authorities target short term gains such as revenue and political expediency.In recent months, the City of Harare, the Ministry of Environment, Water and Climate as well as the Environment Management Agency have been increasingly authorising developments on wetlands, including on internationally protected sites such as Monavale Vlei.

This has resulted in a continual degradation of the capital city’s wetlands, which provide pivotal functions to the city’s residents.“Wetlands are like giant sponges, absorbing and purifying water which would otherwise be mostly lost as runoff,” said Lizwe Jamela, a programme manager at ZLHR. “The water absorbed throughout the rainy season is slowly released in the dry season into the stream and river systems around the city, finding its way into the major dams supplying the city, including Chivero and Manyame. Without the wetlands, these dams would quickly run dry in winter months and poor rainy seasons,” said Jamela. Chivero and Manyame dams are major sources of water for Harare.

The concerns raised by petitioners included the excessive power held by a few individuals at the City of Harare and by the Minister of Environment, Water and Climate. Such power has been used to approve developments on wetlands without taking into account the concerns of residents and the effects of such developments on the city.

Lack of transparency in the process by those involved in the granting of development permits and Environmental Impact Assessments Certificates for developments on wetlands is also a major concern for stakeholders such as ZLHR, residents associations and environmental groups.“Current decision makers seemingly favour the short-term benefits of developments, such as revenue income from levies and rates, without a proper consideration of their environmental impact in the long term,” said Jamela.

Following the parliamentary report, it is now incumbent on authorities to implement the recommendations.

In its 30-page report, the committee criticised the Minister of Environment, Water and Climate for exercising their powers “in a way which has an adverse impact on wetlands” instead of making decisions that are beneficial to the environment.“At the heart of the problem is the amount of power and discretion vested in the Minister… For example, a Minister concerned with environmental conservation has ample power to issue a directive prohibiting any erection of any building at a wetland. However, a Minister more concerned with allowing developments may utilise his or her desecration to the detriment of the environment. Thus, the extent of the power vested in the Minister is a double-edged sword,” reads part of the Parliamentary Portfolio Committee on Environment, Water, Climate and Hospitality Industry report.

Some of the committee’s recommendations include:

That the Executive urgently establish the National Environmental Council as an expert advisory council to the Minister as required by law.

• Establishment of an Environmental Commission as an independent commission.

To independently appoint the Environmental Management Agency Board.

• To appoint an Environmental Tribunal with punitive jurisdiction over environmental disputes.

• To ensure checks and balances and objective assessments of the ecological issues in the decision-making process.

• That all developments on wetlands be prohibited except in the most exceptional circumstances.• That wetlands, like other water resources, such as lakes and dams, cannot be privately owned.

• That, where possible, wetlands be expropriated in the public interest.

• That the Minister of Environment, Water and Climate map all wetlands with expert input and have their territorial footprint gazetted.

• That the Ramsar Convention on Wetlands of International Importance and the UN Convention of Biodiversity be domesticated.