Protestors cry "Shame!" but Trump's message is for cheap power and help for those off the grid in Africa 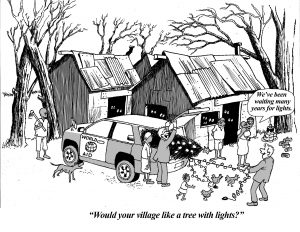 FOR 10 minutes on Monday, protestors chanted and danced a conga around the room where a White House team was hosting its key event at the UN summit on climate change.

With cries of “Shame on you,” and “Keep it in the ground,” they waved banners and threatened to sue governments that continued using coal to generate electricity.

As they marched out, leaving close on half the chairs vacant, a queue of delegates outside who had been denied entry because the room was full quickly filled their seats.

The meeting in Katowice, southern Poland, was chaired by Wells Griffith, senior director for environment and energy on the White House Security Council.

While the media was allowed to cover the event, journalists were not allowed to ask questions.

“The United States will not keep it in the ground,” Mr Wells said.

Instead, he said, “American innovation and entrepreneurship,” would work to reduce emissions from oil, gas and especially coal, allowing it to be used cleanly.

He also pledged to cooperate with other countries, including “India, Australia, Poland and South Africa.”

“It is true that India still has to use coal, but wherever we do it, we use the technology to burn it cleanly,” Dr Vardhan said.

“Coal is part of our shift to clean energy. And cleaner coal is being researched all the time in our laboratories.”

But he said there was a need to share the technology. “This is a battle for the planet, not for any one country. Whether it’s better ways of using wind, solar, coal, oil or gas, we have a duty to share our discoveries if they help reduce climate change.”

In Katowice, Australia’s ambassador for the environment, Patrick Suckling, was on the White House panel and spoke of his country’s need to continue using coal, but to do it cleanly with new technology and the capture of any toxic gas.

South Africa and Botswana get a majority of their electricity from coal, with new plants underway in Tanzania, Kenya and Zimbabwe.

Lack of power in Africa

Across Africa, an estimated 600 million people live without access to the grid.

Aid groups have helped by distributing solar lights, but baseload power to run industry is still in short supply. South Africa is currently in the grip of black-outs as state utility Eskom struggle to cope with demand.

Australia’s resources minister, Senator Matt Canavan, an outspoken supporter of the mining sector, in on record saying coal, “will be used for decades to come,” and that clean coal was, “a way to lower carbon emission”.

Canberra, he said, was “keen to work with other nations on clean-coal technology”.

At Wits the coal is powdered, and harmful elements extracted after which it is burned with green bamboo to lower emissions.

The UN meeting in Katowice is meant to build a common set of rules by which all countries will reduce their release of carbon dioxide and other gases that may contribute to a rise in temperature around the globe.

The original Paris Accord on climate change, signed by a majority of countries including most in Africa, called for a fund of $100bn per year to help poor countries adapt their economies. This was one reason cited by President Donald Trump for pulling the US out of the treaty and few donors have come forward to help.

Last week the World Bank announced $200bn to fund renewable energy, but new coal plants in Bangladesh, Philippines, Australia, India and across Africa have found no difficulty in raising finance, some of it from China.

“Countries, including the US, will continue to use fossil fuel to make sure they meet the needs of their citizens,” Mr Griffiths said.

“This is especially important to the almost 1bn people around the world who lack access to energy.”

The conference will end on Sunday.